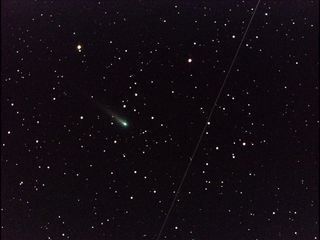 In the early morning of Oct. 25, 2013, NASA's Marshall Space Flight Center in Huntsville, Ala., used a 14" telescope to capture this image of Comet ISON (the greenish object just left of center) cruising through the constellation of Leo the Lion, some 132 million miles from Earth and heading in toward the sun at 87,900 miles per hour.
(Image: © NASA/MSFC/Aaron Kingery)

The potentially spectacular Comet ISON streaks through the constellation Leo (The Lion) in a stunning new NASA photo taken just a month before the icy object's highly anticipated close encounter with the sun.

Comet ISON assumes a greenish tinge in the photo, which was taken with a 14-inch (36 centimeters) telescope on Oct. 25 at NASA's Marshall Space Flight Center in Huntsville, Ala. The comet was about 132 million miles (212 million kilometers) from Earth at the time, blazing through space at nearly 88,000 mph (142,000 km/h), agency officials said.

The image also captures the motion of a manmade object, this one much closer to home. "The diagonal streak right of center was caused by the Italian SkyMed-2 satellite passing though the field of view," NASA officials wrote in a description of the photo. [See more amazing photos of Comet ISON by stargazers]

Comet ISON is slated to skim just 730,000 miles (1.2 million km) above the surface of the sun on Nov. 28. If the icy wanderer survives this flyby, it could put on a great show for skywatchers through the first half of December, experts say.

Spotting the comet right now, however, requires a bit of work.

"At magnitude 8.5, the comet is still too faint for the unaided eye or small binoculars, but it's an easy target in a small telescope," NASA officials wrote.

Nobody knows exactly how ISON will behave during its close solar approach later this month. It's tough to predict the behavior of any comet, especially a "dynamically new" one like ISON that's making its first trip to the inner solar system from the distant, frigid Oort Cloud.

Comet ISON was discovered in September 2012 by two Russian amateur astronomers. Scientists have thus had more than a year to prepare for the comet's solar flyby, and they've mobilized a variety of instruments on the ground and in space to track ISON's progress.

Researchers hope to learn a great deal about the comet's composition by noting which gases boil off ISON as it gets closer and closer to the sun. This information, in turn, could yield insights about the early days of the solar system, which came together nearly 4.6 billion years ago.