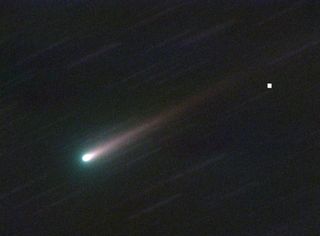 Bruce Gary of Hereford, Arizona obtained this a true color image of Comet ISON on Oct. 22, 2013, showing a greenish coma and reddish tail. The coma is now greener than the tail, which is also a result of the recent emission of gas to the coma. The coma is growing in size, as well as brightness. The tail will be slower to undergo change because it takes time for gas and dust in the coma to be swept into the tail.
(Image: © Bruce Gary)

With just one month to go before its dramatic solar rendezvous, skirting to within a hairbreadth of the surface of the sun, Comet ISON continues to befuddle observers with its performance en route to the sun.

Based on a compilation of Comet ISON observations from observers worldwide as of Oct. 24, the comet, once proclaimed as possibly the "Comet of the Century" was running approximately 1.3 magnitudes, or 3.3 times fainter, than the "official" brightness forecast issued by the Minor Planet Center in Cambridge, Mass. As the comet comes down the home stretch of its long journey before finally grazing to within 730,000 miles (1.2 million kilometers) of the sun, great uncertainty continues regarding whether or not it will remain disappointingly dim or whether it will end up evolving into a spectacularly bright object.

Carl Hergenrother of the Lunar and Planetary Laboratory in Tucson, Ariz., noted that part of the uncertainty is due to what wavelengths the comet is observed in: "Visual and CCD-V observations do show a comet that is brightening at a normal rate (perhaps even faster than normal for a dynamically new comet) while CCD-R observations show a comet that is barely brightening at all. CCD-R sees predominately dust in contrast with visual and CCD-V, which have large gas components. It seems that over the past month or so ISON's gas production rate has increased as expected while its dust production rate has not," Hergenrother said. "I don't really know what this means but something has to give, either the dust production picks up or the gas production slows down." [Photos of Comet ISON: A Potentially Great Comet]

The highly regarded comet observer John Bortle is just as perplexed by the comet's recent appearance, commenting that the recent images along with his own visual impression, is "downright weird." He adds that, "There is a bright, miniature, long-tailed comet situated within a much larger, but very much fainter and diffuse halo of a coma."

"Those visual people using larger telescope also often remark about the odd way the comet looks, while those using relatively small scopes and big binoculars report seeing a larger, more-or-less faint but uniform cometary mass," he added. "This comet is currently at a distance from the sun where it should no longer exhibit such a dichotomy of appearance.”

Bortle has observed several hundred comets and yet, he writes, "At this stage of the game, with the comet about to cross the orbit of Earth, I cannot recall any previous comet in my 50-plus years of comet observing looking quite like this. So, what does ISON's current look foretell, or mean? I honestly don't know. All I can say is I don't like the odd look of it at this time."

One step forward, one step back

Around Oct. 19, ISON seemed to suddenly brighten at a more rapid pace. On Oct. 21, Arizona observer Bruce Gary (who was the first to image the comet after it emerged from out of the glare of the sun on Aug. 12) wrote, "The comet (coma plus tail) continues a dramatic brightening trend that started Oct 19. The inner coma has brightened (due perhaps to an outburst of gases). This next week could be busy - and exciting!" [Potentially Dazzling Comet ISON: 8 Essential Facts]

But just four days later, with the comet showing signs of fading a bit rather than brightening, Gary, sounding almost a bit exasperated commented, "I don't know what's going on with this comet!"

Analyzing all the observations made since Sept. 4 shows that ISON is responding to the sun more like a solid body would respond, rather than as a typical "fluffy" comet.

Whatever is happening, Comet ISON continues on its way in toward the sun and will cross the Earth's orbit on Wednesday (Oct. 30) at 6 p.m. EDT (22:00 GMT).

For the last couple of months, observers watching the comet brighten at what has seemed to be a frustratingly slow pace are still waiting for a more rapid brightening trend. That may still happen, but time is now running out; four weeks from Thursday will be the comet's moment of truth as it whips around the sun.

Will it remain disappointingly dim? Will it finally brighten up? Will it still be completely intact when it sweeps back out into space or will the sun's extreme heat and tremendous tidal forces cause it to fracture into several pieces? At SPACE.com we will continue to monitor the comet's future behavior and provide any new updates in the days to come, so stay tuned!