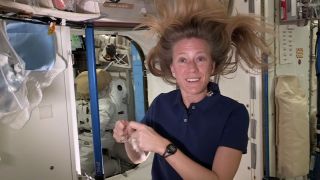 NASA astronaut Karen Nyberg demonstrates how a single strand of hair can be used to move in the microgravity environment of space in a video recorded on the International Space Station in October 2013.
(Image: © NASA)

It doesn't take much of a push to get around in space, as NASA astronaut Karen Nyberg recently demonstrated aboard the International Space Station.

In a video to describe the effects of weightlessness, Nyberg used a single strand of her own hair to propel herself, tumbling slowly backward after pushing off a blue handrail on the orbiting lab. The brief experiment, which  NASA posted online last week, was inspired by a conversation fellow astronaut Cady Coleman had with Sandra Bullock, star of the blockbuster space thriller "Gravity."

Coleman helped Bullock prepare for her role as an astronaut in the film, which opened Oct. 4. Bullock said she was particularly struck by Coleman's description of how effortlessly spaceflyers can float around the orbiting lab.

"The thing that resonated the most with me — you said something about your hair. You could take one strand of hair and push off the wall with that hair, and it would propel you backwards," Bullock told Coleman in a NASA video last month.

While Coleman is a veteran of three spaceflights, she hasn't been in orbit since May 2011. Nyberg, however, is a crewmember of the International Space Station's current Expedition 37, and she decided to put Coleman's assertion to the test.

"Since I have the resources, I thought I would give it a try," the long-tressed Nyberg said in the Oct. 18 NASA video.

She then plucked one strand of hair, held it between her two hands and pressed it against a space station handrail. The slight force Nyberg applied sent her falling backhard in seeming slow motion, her white-socked feet rising as her head dipped down.

Nyberg arrived at the space station in late May and is scheduled to return to Earth on Nov. 10. She had flown in space once previously, as a crewmember aboard the space shuttle Discovery's STS-124 mission in 2008.