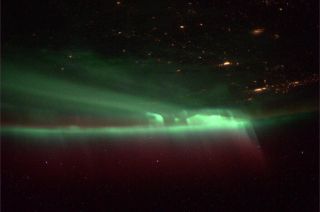 NASA astronaut Mike Hopkins, Expedition 37 flight engineer, posted this photo of the northern lights from space on Oct. 9, 2013 from his home on the International Space Station.
(Image: © Mike Hopkins/AstroIllini)

NASA astronauts are still able to tweet from space, despite the ongoing government shutdown.

Space agency programs have all but come to a standstill since the government shutdown started on Oct. 1, but astronauts Karen Nyberg and Mike Hopkins continue to send a steady stream of social media posts the International Space Station. Hopkins even posted photos of an eerie space cloud created by a Russian missile test launch on Oct. 10.

Hopkins and Nyberg have both sent out photos and updates from their Twitter handles, @AstroIllini and @AstroKarenN, respectively, but neither has commented on the ongoing shutdown, which began Oct. 1 on Earth.

NASA has taken special measures to be sure the astronauts on the orbiting laboratory are safe during the government shutdown. Veteran space traveler Nyberg and first time flyer Hopkins are now supported by a skeleton crew in Mission Control at NASA's Johnson Space Center in Houston.

"NASA will continue operations in the Mission Control Center to protect the lives of the six crew members in orbit and the safety and security of the space station," NASA spokesman Josh Byerly told SPACE.com in an email just before the shutdown went into effect.

Less than 600 of about 18,000 space agency employees are able to work during the shutdown. NASA-run social media accounts have gone dark (although NASA scientists are still able to send updates from their personal accounts) and agency events around the United States were cancelled since the shutdown began.

"Sorry, but we won't be tweeting/responding to replies during the government shutdown," Voyager 1's Twitter profile (@NASAVoyager) now reads. "Be back as soon as possible."

In 2009, NASA astronaut Mike Massimino became the first person to send a Twitter update from space. He sent the post during a space shuttle mission to service the Hubble Space Telescope.