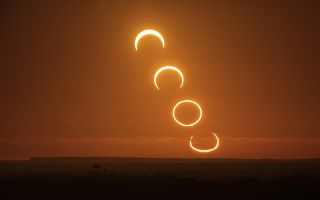 “Highly Commended” by Royal Observatory Greenwich’s Astronomy Photographer of the Year 2013 exhibition, this amazing space wallpaper is a composite shot showing the progress of an annular eclipse in May 2013. The Moon’s orbit about the Earth is not perfectly circular, so that at different times the Moon can be slightly closer or further away than usual. If the Moon passes in front of the Sun when it is at its furthest point, it will appear to be too small to entirely cover the solar disc. This is an ‘annular eclipse’ in which a ring, or annulus, of the Sun remains visible. Close to the horizon the distorting effects of Earth’s atmosphere can also be seen. This image was released Sept. 19, 2013.