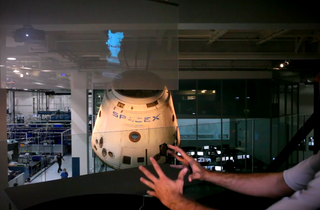 Elon Musk shows how gesture-based tech is being used to design rockets at SpaceX.
(Image: © SpaceX)

Serial innovator Elon Musk is living up to his reputation as a real-life Tony Stark.

In a new video, Musk shows off the excessively cool "Iron Man"-like tech that is quite literally at his fingertips inside the rocket-making labs of his company SpaceX.

The video tour of Musk' futuristic design tech shows just that. Musk first demonstrates how he can grab, rotate and zoom in on a wireframe model of SpaceX's Merlin rocket engine on a computer screen, simply by waving his hands. He then shows how the full CAD model of the rocket engine can be manipulated on a bigger screen — and in 3D if the user is wearing special glasses.

Elon Musk even shows how he can maneuver the rocket model on a freestanding glass projection overlooking SpaceX's workspace, just like the technology in high-tech "Iron Man" superhero films.

Musk says that people typically interact with computers in an "unnatural, 2D way," but SpaceX is developing interfaces to combat that problem.

"I believe we're on the verge of a major breakthrough in design and manufacturing," Musk says in the video, "in being able to take the concept of something from your mind, and translate that into a 3D object really intuitively on the computer."

Musk also shows how to make a virtual rocket-part design real by 3D printing it. Using a 3D laser metal printer, Musk shows how SpaceX can build up layers and layers of titanium particles to make a cryogenic valve housing.

Musk is a busy entrepreneur. He recently unveiled his vision for a futuristic "Hyperloop" transport system that could get passengers from San Francisco to Los Angeles in 35 minutes, and he announced that he will travel across the country in one the electric cars made by Tesla Motors, another company he founded.

SpaceX, meanwhile, has a $1.6 billion contract with NASA to provide 12 unmanned cargo deliveries to the International Space Station. It has successfully completed two of those flights so far.