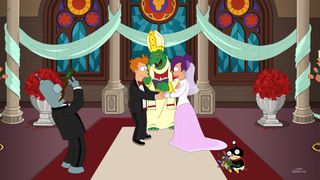 Fry and Leela get married in the finale of the animated sci-fi series "Futurama," which aired Sept. 4, 2013.
(Image: © Futurama TM and © 2013 Twentieth Century Fox Film Corporation. All Rights Reserved.)

"Futurama" has said goodbye yet again.

The final episode of the animated science fiction series aired Wednesday night (Sept. 4) on Comedy Central. Eulogizing "Futurama" is always a dicey proposition, however, since the show has come back from the dead several times before.

"In our hearts, 'Futurama' lives," series creator Matt Groening said Wednesday night during a webcast chat session celebrating the series finale. "We've been in this situation before. It's probably over, but we've said that before, too." [Top 10 Sci-Fi TV Shows Ever]

"Futurama" centers on the life of Philip J. Fry, a dimwitted 25-year-old pizza delivery boy who accidentally falls into a cryogenic chamber on New Year's Eve in 1999 and wakes up 1,000 years later.

Fry finds work at an intergalactic delivery company called Planet Express, which is run by the eccentric Professor Hubert J. Farnsworth. In addition to being 160 years old and a self-described mad scientist, the Professor also happens to be Fry's great-nephew, going down 30 generations or so.

A lot of other interesting and entertaining characters work at Planet Express, including the foulmouthed robot Bender and a one-eyed mutant named Leela, who eventually becomes the love of Fry's life (a bit more on that later).

"Futurama" debuted in 1999, running for four seasons on Fox (the same network that continues to air another Groening creation, "The Simpsons"). "Futurama" reruns were syndicated on the Cartoon Network, and then the show came back in four new direct-to-video films, which were released from 2007 through 2009.

Comedy Central reached an agreement with Fox to broadcast those four movies as 16 half-hour episodes, which became season five of "Futurama" and aired in 2008 and 2009.

Comedy Central then picked the show up in a more standard way, running 26 new episodes as season six in 2010-11, then 26 more as season seven in 2012-13. The network announced earlier this year, however, that it would not renew "Futurama" for an eighth season.

"Futurama" owes its extended run to its devoted fans, who convinced network executives that a market still existed for the series, said Billy West, the voice of Fry, Professor Farnsworth and many other characters on the show.

"I want to thank every single one of them, and if I could I would in person," West told SPACE.com before season seven premiered last year. "Because that's what brought the show back; we couldn't do much about it."

Fry and Leela get hitched in the series finale, cementing their love in a ceremony officiated by the reptilian Space Pope.

Those of you who haven't seen the episode yet can breathe easy, for that's not much of a spoiler. A lot of other stuff happens in the finale, which "Futurama" executive producer David X. Cohen described in the web chat last night as a "very romantic gore-fest."

Groening thinks this latest "Futurama" swan song — the fourth finale penned for the show by writer Ken Keeler — takes the series out on a high note.

"This one just worked really well," Groening said. "I think it's moving, and I think it's funny, and it's something you've never seen before."

But that doesn't necessarily mean that "Futurama" is dead and buried for good this time.

"We like each other," Groening said of the "Futurama" cast and crew. "We'd love to work together again."