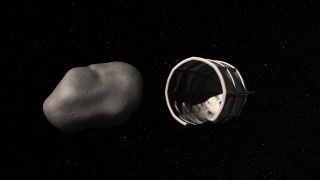 Science and space exploration have caught up to science fiction in many ways, producing marvels beyond the imaginings of the visionary writers of the past. Yet there are staples of science fiction that current technology is still leagues away from attaining, and which some doubt can ever be achieved.

"'Beyond the solar system' is too far away," said Kim Stanley Robinson, author of the "Red Mars" trilogy and the upcoming "2312" (being released May 22 by Hachette Books' Orbit imprint). "It's a joke and a waste of time to think about starships or inhabiting the galaxy. It's a systemic lie that science fiction tells the world that the galaxy is within our reach."

However, NASA itself has said the idea is worth pursuit and has teamed with the Defense Advanced Research Projects Agency (DARPA) to sponsor the 100 Year Starship project to spur scientists to look into it.

Jack McDevitt, author of the Nebula award-winning "Seeker" and the upcoming "The Cassandra Project" (Ace, Nov. 6), agrees with Robinson that traveling to other stars is farfetched.

"Ditto time travel," he added in an email to SPACE.com. "We will probably never develop antigravity or artificial gravity, or truly intelligent (i.e., self-aware) machines. There will always be limits to human life spans. Other technologies that will probably never arrive because of affiliated social problems: flying cars and invisibility. (Think drunks at 6,000 feet.)"

Yet McDevitt also pointed out that life spans are getting longer, in accord with fictional visions. And many other science fiction predictions have come true.

"We walked on the moon," he said. "And we've come a long way with automated space vehicles. The real world has caught up with predictions regarding implants and communications systems."

Some writers have seen the landscape of science change radically during their lifetimes.

"The very idea of orbiting artificial satellites and sending astronauts to the moon was science fiction when I first started my career," said Ben Bova, author of the award-winning "Titan" and the upcoming "Orion and King Arthur" (Tor, July 3).

Both writers and governments of the past envisioned using computers to organize society.

"The Soviets in the 1950s and '60s were desperately struggling to invent computer power that would have been strong enough to run the Soviet economy," Robinson said. "They failed, as we know, but what's interesting is that the computer power they were trying for, that would run a national economy, is just a fraction of what we have now. So you can imagine a kind of automated economy that isn't monetary, where people put in their needs, they make what they can, they get what they need, and that they organize it by computers or artificial intelligence." [Terraforming the Solar System: Q&A With Kim Stanley Robinson]

In some cases, science fiction has even been the engine that drove science to realize certain goals.

"Science fiction helps to inspire young readers, who then go and make science fiction become actual fact," Bova told SPACE.com in an email. "Science fiction stories, and films such as George Pal’s 'Destination Moon’ (written by Robert A. Heinlein) helped to convince the taxpaying public that space flight was not only possible, but desirable from both a political and economic point of view."

And in other ways, technology has produced what no writer ever dreamed of.

"Science fiction writers missed the most salient feature of our modern era: the Internet," McDevitt said.

Ultimately, no matter what humans manage to achieve, science fiction writers will be, by definition, always a step ahead.

And there are some items on the science fiction wish list that experts say could be realized soon.

"One SF prediction that I would like very much to see: Get solar collectors launched to beam energy back home, and get away from fossil fuels," McDevitt suggested.

Colonies on the moon and Mars, space elevators and quantum computers also may be on the horizon, depending on whom you ask.