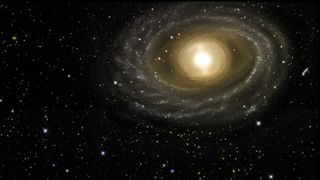 This image was taken with the Dark Energy Camera. It shows the NGC 1398 galaxy, which is packed with more than 100 million stars and lives in the Fornax cluster, some 65 million light years from Earth.
(Image: © Dark Energy Survey)

Scientists have embarked on a quest to map one-eighth of the entire sky looking for clues about dark energy, the mysterious force believed to be responsible for the ever-accelerating expansion of the universe.

The five-year Dark Energy Survey (DES for short) officially began after sunset on Aug. 31, 2013. Its main instrument is the 570-megapixel Dark Energy Camera at the Cerro Tololo Inter-American Observatory in the Andes Mountains in Chile.

Though scientists think dark energy comprises 74 percent of the universe, they do not fully understand what it is. Dark energy, for now, is the name given to the force that seems to be working against gravity, causing the expansion of the universe to speed up instead of slow down. [The History & Structure of the Universe (Infographic)]

In each snapshot, the powerful Dark Energy Camera, which was built at Fermilab in Batavia, Ill., will be able to detect light from more than 100,000 galaxies up to 8 billion light-years away. Over five years, scientists expect they will collect color images of 300 million galaxies. They also anticipate that they will discover 4,000 new supernovas, including many that burst onto the scene when the universe was half its current size.

Scientists will be mining those images to chart the history of cosmic expansion, which could reveal new insights about how dark energy works.

"We're looking at this big galaxy map of the universe as a way of finding evidence for dark energy and characterizing its nature with cosmic epoch," Ofer Lahav, of University College London and head of the DES science committee, said in a statement. "An even more challenging goal for DES is to tell if what causes the acceleration of the universe is indeed dark energy, or something entirely different."

The project researchers say they will use four methods to investigate dark energy.

They will count galaxy clusters at different points in time to glean information about the competition between gravity, which pulls mass together to form galaxies, and dark energy, which pushes mass apart.

The scientists will also measure the brightness of supernovas, the explosions of massive stars that have reached the end of their lives. By gauging how far away these distant supernovas are, scientists can better determine how fast the universe has been expanding.

They will measure the shapes of millions of galaxies to reveal how dark energy might interact with gravity to shape dark matter, another elusive component of the universe about which little is known. (Light bends around dark matter, causing some faraway galaxies to appear distorted from scientists' view on Earth.)

Lastly, the team says it will use sound waves to create a large-scale map of the universe's expansion over time. When the universe was very young, the play between matter and light kicked off a series of sound waves that left an impression on how galaxies are distributed throughout the universe. Better data on the shape of this imprint could be used to understand the universe's current and past expansion rates, the researchers say.