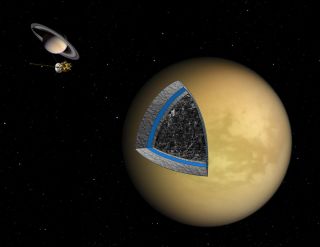 Past research suggested Titan has an ocean hidden under its outer icy shell 30 to 120 miles (50 to 200 kilometers) thick. Investigators aim to explore this underground ocean in the hopes of finding alien life on Titan, since virtually wherever there is water on Earth, there is life. [See more photos of Titan, Saturn's largest moon]

To learn more about Titan's icy shell, planetary scientist Doug Hemingway at the University of California, Santa Cruz, analyzed the Cassini probe's scans of Titan's gravity field. The strength of the gravitational pull any point on a surface exerts depends on the amount of mass underneath it. The stronger the pull, the more the mass.

What the investigators discovered shocked them. The regions of high elevation on Titan had the weakest gravitational pull.

"It was very surprising to see that," Hemingway told SPACE.com. "We assumed at first that we got things wrong, that we were seeing the data backwards, but after we ran out of options to make that finding go away, we came up with a model that explains these observations."

To explain these gravity anomalies, Hemingway said to imagine mountains on Titan having roots. "It's like how most of an iceberg actually lies submerged underwater," he said. "If that root is really big, bigger than normal, it would displace water underneath it."

Ice has a lower density than water — a chunk of ice weighs less than a similar volume of water. These high-elevation areas on Titan apparently have roots large enough to displace a lot of water under them, meaning they exert a weaker gravitational pull.

Ice is buoyant in water. "In order to essentially hold these big icebergs down and keep them from bobbing up, that means Titan's shell has to be extremely rigid," Hemingway said.

It remains uncertain what makes Titan's shell this rigid. The ice might possess cage-like molecules known as clathrates that could make it stiffer. Also, "if the ocean underneath the shell is colder than before thought, that could make the ice shell thicker and thus more rigid," Hemingway said.

This rigidity could mean Titan's shell is less geologically active than once thought. "If at least the top 40 kilometers (25 miles) is very stiff and cold and dead, if you want something like cryovolcanoes that erupt water instead of lava on Titan's surface, you have to be more creative about how that might happen," Hemingway said.

Their model also suggests Titan's shell has seen an extensive amount of erosion, with features carved more than 650 feet (200 meters) deep on it surface. "We now need different groups of people to figure out how so much material could get broken up and transported long distances across Titan's surface," Hemingway said.

One implication of these new findings relates to whether or not Titan's interior is separated into distinct layers. If researchers have underestimated Titan's gravity field, one might suspect its core is a giant blob of matter that is not made up of distinct layers as one would expect from such a large body. For instance, Earth is separated into a crust, mantle and core, and even large asteroids such as Vesta seem to have interiors divided into several layers.

"Maybe Titan is a mixture of ice and rock from the core nearly all the way out, and it's only in the last part near its surface that it's differentiated into ice and water," Hemingway said. "But we could be wrong there."

To help solve this mystery, "what we need is a Titan orbiter," Hemingway said. "That way we can have much better readings of Titan and learn more about its ice shell and its interior."

The scientists detailed their findings in the Aug. 29 issue of the journal Nature.