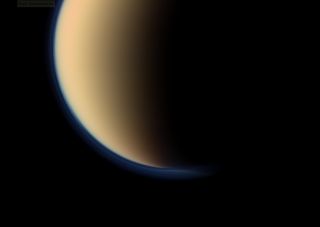 This view shows a close up of toward the south polar region of Saturn's largest moon, Titan, and show a depression within the moon's orange and blue haze layers near the south pole. NASA’s Cassini spacecraft snapped the image on Sept. 11, 2011 and it was released on Dec. 22.
(Image: © NASA/JPL-Caltech/Space Science Institute)

The new map of Titan was stitched together from radar observations of the moon by NASA's Cassini spacecraft. It reveals an unprecedented look at Titan's surface and should help scientists learn more about one of the most Earth-like bodies in the solar system, members of the mapping team said.

"Titan has so much interesting activity — like flowing liquids and moving sand dunes — but to understand these processes it's useful to know how the terrain slopes," Ralph Lorenz, a member of the Cassini spacecraft's radar team at the Johns Hopkins University Applied Physics Laboratory in Laurel, Md., who led the map design effort, said in a statement. "It's especially helpful to those studying hydrology and modeling Titan's climate and weather, who need to know whether there is high ground or low ground driving their models." [Amazing Photos: Titan, Saturn's Largest Moon]

Titan is the second largest moon in the solar system, and the only one known to have clouds and a dense atmosphere. Scientists have been keen to study the cloud-covered world because of its Earth-like qualities. Titan's atmosphere, like Earth, is primarily composed of nitrogen, but instead of water, Titan's rain, clouds and lakes are made of methane.

Titan's nitrogen-rich atmosphere also contains organic chemicals that are derived from methane, which may hold clues to the building blocks of life as we know it, the researchers said.

Seeing through the clouds

Typically, NASA maps the topography of planetary bodies using remote cameras to observe the shapes and shadows of the landscape. Titan's thick atmosphere, however, makes this difficult, the researchers explained.

NASA's Cassini probe has flown by Titan nearly 100 times since it arrived at Saturn in 2004. As the spacecraft swings past the hazy moon, it uses a radar imager to pierce through the clouds. These radar measurements can then be used to estimate the heights of topographical features on the moon.

But, since Cassini is only able to observe Titan on flybys, putting together a complete map of its surface is challenging.

"We have only imaged about half of Titan's surface, and multiple 'looks' or special observations are needed to estimate the surface heights," Lorenz said. "If you divided Titan into 1-degree by 1-degree [latitude and longitude] squares, only 11 percent of those squares have topography data in them."

To create a global map, Lorenz and his colleagues used a mathematical process called "splining," which uses smooth, curved surfaces to stitch together grids of existing data.

"You can take a spot where there is no data, look how close it is to the nearest data, and use various approaches of averaging and estimating to calculate your best guess," Lorenz said. "If you pick a point, and all the nearby points are high altitude, you'd need a special reason for thinking that point would be lower. We're mathematically papering over the gaps in our coverage."

Piecing together the puzzle

Scientists already knew that Titan's polar regions are lower in altitude than regions around the equator, but the new topographic map fills in details that will enable researchers to make more accurate models of how and where Titan's rivers flow, and seasonal distribution of the moon's methane rainfall.

"The movement of sands and the flow of liquids are influenced by slopes, and mountains can trigger cloud formation and therefore rainfall," Lorenz said. "This global product now gives modelers a convenient description of this key factor in Titan's dynamic climate system."

The map was compiled using data from 2012, but Lorenz said it may be updated when the Cassini spacecraft's mission ends in 2017. In the meantime, the scientists are hoping the newly compiled topographical information will spur new research on Titan.

"With this new topographic map, one of the most fascinating and dynamic worlds in our solar system now pops out in 3D," Steve Wall, deputy team leader of Cassini's radar team at NASA's Jet Propulsion Laboratory in Pasadena, Calif., said in a statement. "On Earth, rivers, volcanoes and even weather are closely related to heights of surfaces — we're now eager to see what we can learn from them on Titan."

The map was published in the July 2013 issue of the journal Icarus.