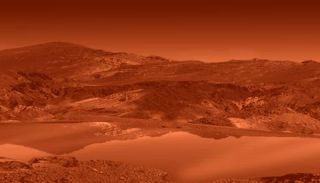 This artist concept shows a mirror-smooth lake on the surface of the smoggy moon Titan.
(Image: © NASA/JPL)

Today, methane sloshes around in pools on the surface of Titan, but the hydrocarbon may eventually vanish from Saturn's giant moon, according to a new study.

Images and data from NASA's Cassini spacecraft show that the compound doesn't seem to be getting replenished fast enough on Titan's surface to keep the methane cycle sustainable, scientists say.

Besides Earth, Titan is the only known place in our solar system to have stable liquids on its surface. The huge moon's clouds, lakes and rain are made up of hydrocarbons, or molecules composed of hydrogen and carbon, such as methane and ethane. [Amazing Photos: Titan, Saturn's Largest Moon]

Cassini images have revealed that Titan's hydrocarbon lakes stay remarkably consistent in size and shape over time. This means that either the lakes evaporate at a crawling pace, or there are enough downpours to offset the evaporation. Since scientists have observed only occasional bursts of rain on Titan, they believe that the lakes must have quite stable, slowly evaporating contents, and may be dominated by ethane, which doesn't vanish as quickly as methane.

When methane floats high into Titan's soupy atmosphere, the compound is broken apart by sunlight. Many of its hydrogen atoms keep rising and disappear into space, while the remaining elements go on to make carbon-rich products like ethane. Scientists say this process should eventually diminish the overall amount of methane in Titan's environment, as compounds pieced together out of methane's leftovers continue to get dumped on the moon's surface.

"We are seeing an active Titan whose active chemistry may come to an end in some tens of million years," said Christophe Sotin, a scientist at NASA's Jet Propulsion Laboratory in Pasadena, Calif., who has been analyzing Cassini measurements of Titan's lakes and seas. That might sound like a long time away, but it could mean that Titan's "methane era" is somewhat short-lived, at least on a geological timescale.

Researchers look to Titan's methane cycle for answers about what Earth looked like before life evolved; the moon's chemistry could produce prebiotic molecules, complex organic compounds that are believed to have marked an early step in the emergence of life on Earth.

"The discoveries made by Cassini have revolutionized our understanding of Titan," Sotin said in a statement from NASA. "They open new avenues for seeking habitable worlds around exoplanets. They also trigger new questions about the exchange processes between the interior and the atmosphere — and about the composition of these organic particles — that only future missions to Titan will be able to answer."

The research was detailed in the journal Icarus in December, alongside other findings based on new observations in a previously unexplored part of Titan's northern hemisphere. The researchers said they discovered two knee-deep lakes and another three new, mirror-smooth lakes in the area. They also found a swampy area or a cluster of small rivers connecting two of Titan's seas, Ligeia Mare and Kraken Mare, a lake bigger than the Caspian Sea.

New observations at optical wavelengths of Titan's northern realm have been possible since the seven-year seasons started changing on the moon. An icy cloud has been disappearing over Titan's north pole, and the region entered spring in August 2009.

Meanwhile, researchers recently confirmed that it's fall in Titan's southern hemisphere. An icy haze like the one that dissipated up north has been forming over the moon's south pole, meaning that winter is coming for the southern realm.

The Cassini probe launched in 1997 and has been studying Saturn and its rings and moons since it arrived in orbit around the planet in 2004. Cassini's mission has been extended through 2017.