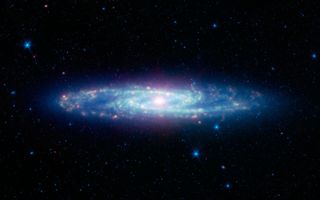 The spectacular swirling arms and central bar of the Sculptor galaxy are revealed in this space wallpaper from NASA's Spitzer Space Telescope.
(Image: © NASA/JPL-Caltech)

The spectacular swirling arms and central bar of the Sculptor galaxy are revealed in this space wallpaper from NASA's Spitzer Space Telescope. This image is an infrared composite combining data from two of Spitzer's detectors taken during its early cold, or cryogenic, mission. Also known as NGC 253, the Sculptor galaxy is part of a cluster of galaxies visible to observers in the Southern hemisphere. It is known as a starburst galaxy for the extraordinarily strong star formation in its nucleus. This activity warms the surrounding dust clouds, causing the brilliant yellow-red glow in the center of this infrared image. This image was released Aug. 23, 2013.