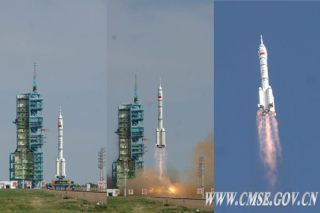 Liftoff of Shenzhou 10 crew en route to docking with target module — a prelude of larger things to come.
(Image: © CMSE)

China is pressing forward on its human space exploration plans, intent on establishing an international space station and, experts say, harnessing the technological muscle to launch its astronauts to the moon.

Highlighting China's intent, the country is working with the United Nations to stage a major workshop on human space technology, to be held Sept. 16-20 in Beijing.

On the agenda, the workshop aims to contribute to "establishing institutional capacity in microgravity science and enhancing international cooperation in human space exploration as a global endeavor," according to meeting documents.

"With such a strong partner as China, I am convinced that this workshop will be extraordinary and interesting, and valuable results will be achieved for the whole space community," Mazlan Othman, director general of the United Nations Office for Outer Space Affairs, said in a statement.

The workshop "will provide great opportunities for space colleagues from the world to share and exchange information and ideas on human space exploration activities. I believe those exchanges will definitely enhance the friendship among us and the international cooperation in the endeavor," Zhaoyao Wang, director general of the China Manned Space Agency (CMSA), said in a statement.

Zhaoyao said that, since its establishment in 1992, the CMSA has organized 11 flight missions and sent 10 Chinese astronauts into outer space to bolster the nation's human space exploration activities.

China's first space traveler, Yang Liwei, was sent into orbit in October 2003, making China the third nation — after Russia and the United States — to launch astronauts to space using its own vehicles. [Chinese Lift-Off! Crew of 3 to Visit Space Lab |(Video)]

"The year 2013 marks the 10th anniversary of China's manned space flight mission," Zhaoyao said. "These achievements are crucial steps towards fulfilling China's plans of building a manned space station around the year 2020, which would benefit the world by promoting international cooperation in the utilization of the station for the peaceful exploration and use of outer space."

"My top line is that the Chinese are moving ahead aggressively on a human exploration program," said Laurence Young, Apollo program professor of astronautics and professor of health sciences and technology at the Massachusetts Institute of Technology.

In gauging China's human space exploration campaign, Young said "they have laid out what appears to be a more than reasonable, but nevertheless optimistic plan."

From single-piloted missions to multiple crews, space walking, "everything they have been touting they have, in fact, made progress on," Young said. "To many of us, it has been faster than we might have expected."

Some experts have criticized China's rockets and spacecraft as simply blowing dust off Russia's Soyuz design. But Young disagreed, saying, "They are wrong." China has taken the best of what they've imported from the Russians, learned from America and the European Space Agency, he said, "and are building a distinctive Chinese program."

Going to the moon is not easy, Young said. "We have to give the Chinese credit for taking on those hard problems. Whether they will be successful or not remains to be seen. But they are serious about it," he said.

A leading expert in space biomedical research and artificial gravity, Young has been invited to take part in an International Forum for Space Life Science and Space Biotechnology, to be held Sept. 24 in Beijing.

At the forum, China's strategic plan for life science, biotechnology and international cooperation, geared to the country's space station, is to be rolled out.

"Around 2020, China is going to build its own space station and to carry out space science research of larger scale," said Yidong Gu, an Academician of the Chinese Academy of Sciences and leader of the science planning group for China's space station. [Watch China's first video lesson from space]

Writing for the journal Foreign Policy this month, John Hickman, a professor of political science at Berry College in Georgia, said there "are unmistakable warning signs that China may surpass the United States and Russia to become the world's pre-eminent spacefaring power."

Hickman said China's recent piloted space mission, Shenzhou 10, "may determine the terms under which the spacefaring powers compete on the final frontier. By the way, he said that one of many ancient names for China is Tianchao — the Celestial Empire. Shenzhou 10 may be pointing the way toward its creation," he said.

"For Washington to continue to ignore Beijing's resolute space policy doesn't mean there is no space race; it means that Beijing wins by default," he said.

"Saying that it takes two to tango is a poor excuse for losing because international space politics isn't a tango. Instead, it is a conga line," Hickman told SPACE.com.

"One of the underlying problems in U.S. space policy-making is the conviction based on the dominant Constructivist Theory of International Relations that the behavior of states is necessarily constrained by a consensus on international norms," Hickman said. "Some decision-makers in Washington are convinced that Beijing can be talked into accepting the leadership of Washington because it has been working to establish that consensus together with the second-tier space powers."

Hickman said the hitch is that a state like China can ignore the consensus if it possesses the material means and the economic and technological wherewithal to do so. China does, he said.

"The problem with the constructivist theory of international relations is that it tempts decision-makers into engaging in wishful thinking about the future.  If China takes the lead, then the other second-tier space powers will begin to follow the Chinese lead," Hickman said.

The last time America was forced to participate in a space race, Hickman said, America managed "a come from behind win" in large part because the U.S. had the advantage of a much larger and more efficient economy than the Soviet Union.

"That is not true this time around. China is not the Soviet Union. The implication is that what we need is a serious 'forward' space policy now or we will lose not only this international competition but also the chance to lead the human endeavor in space," Hickman said.

Hickman then posed this question with a suggested answer: "What should the United States do? Answer: Establish a permanent manned United States base on the moon first."

"I do think a human moon landing is very much in the cards for China," said Narayani Basu, a research officer with the Southeast Asia Research Program at the Institute of Peace and Conflict Studies in New Delhi, India. "It would seem a natural culmination to the three-phase program that they are working towards completing," she told SPACE.com

All in all, space is the last frontier left, Basu said. "Beijing is aware of its competitors. It has done its research and it is working to become a competitor to be reckoned with as far as space exploration goes. They've improved and built upon the technology already in place so that their space program is leaner and sleeker in terms of budgeting," she said.

Basu said that China is looking for resources on Earth. And the next step is outer space.

Asteroid mining, establishing a permanent manned base on the moon, these are all avenues just waiting to be taken advantage of, Basu added. "The U.S. program is struggling at the moment. Taking a quick lead in matters like these will give Beijing an upper hand in terms of 'geo-strategy' in the future," she said.

China's space station is to be in place by 2020, officials have said — perhaps the same year that the International Space Station is going to be scrapped.

"That will undoubtedly give the Chinese an edge on the international space stage," Basu said. "It is also a signal of hope to the Chinese people that China is regaining some of its past glory…that it's still a strong contender in world politics. It is a message that the Party would like to get across, both internationally and domestically, in my opinion, especially given all the bad press about its slowing economy."

"His vision implies that China will become stronger, has a definite strategic and economic footprint, and a global — and with the culmination of the space program — extraterrestrial — presence. So, in all fields and arenas, it will be a force to reckon with," Basu said.