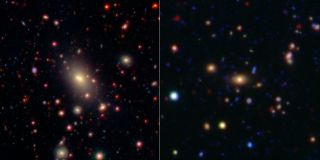 Both of these galaxy clusters have a BCG, or brightest cluster galaxy, at their center. The image at left draws from infrared data from WISE (in red) and shows the cluster known as Abell 2199, which is 400 million light-years from Earth. On the right is the cluster ISCS 1433.9+3330, which is significantly farther away at a distance of 4.4 billion light-years. That image uses infrared data from Spitzer (in red).
(Image: © NASA/JPL-Caltech/SDSS/NOAO)

At the core of most galaxy clusters in our universe, there are cosmic cannibals — monster galaxies that gobble up their neighbors to grow bigger and bigger in size. But the appetite of these hungry objects seems to fade as they get older, a new study reveals.

"We’ve found that these massive galaxies may have started a diet in the last 5 billion years, and therefore have not gained much weight lately," study author Yen-Ting Lin of the Academia Sinica in Taipei, Taiwan, said in a statement. [When Galaxies Collide: Photos of Cosmic Crashes]

Galaxy clusters are arranged around the brightest member of their bunch, formally called the brightest cluster galaxy, or BCG. Over time, these central galaxies fatten up by cannibalizing the other galaxies around them and taking on other stars.

"You can't watch a galaxy grow, so we took a population census," Lin explained in a statement from NASA. "Our new approach allows us to connect the average properties of clusters we observe in the relatively recent past with ones we observe further back in the history of the universe."

Lin and colleagues found that BCGs initially grew as predicted, but when the universe was about 8 billion years old these galaxies largely gave up their cannibal ways.

The researchers are still looking for an explanation as to why BCGs seem to have changed their diet around 5 billion years ago. They note that it is possible that the galaxies are still growing in old age but the WISE and Spitzer surveys are not detecting a large numbers of stars in the more mature clusters.

"BCGs are a bit like blue whales — both are gigantic and very rare in number," Lin said. "Our census of the population of BCGs is in a way similar to measuring how the whales gain their weight as they age. In our case, the whales aren't gaining as much weight as we thought. Our theories aren't matching what we observed, leading us to new questions."

The Spitzer Space Telescope is an infrared observatory that launched on Aug. 25, 2003 and has spent nearly 10 years in space. NASA's WISE space telescope was an infrared all-sky survey tool that launched in 2009 ended its mission in 2011.

The findings have been detailed in the Astrophysical Journal.