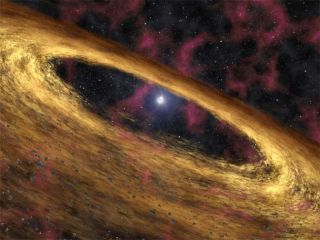 Artist conceptioin showing a debris disk formed around pulsar 4U 0142+61 after a supernova explosion.
(Image: © NASA/JPL-Caltech)

Rings of debris formed in the aftermath of stellar explosions could fuel the birth of new, rocky planets around dead stars. They could also provide an alternative way to make black holes, scientists said today.

Using NASA's Spitzer Space Telescope, researchers detected a cool disk of material glowing in infrared light around a young X-ray pulsar, a type of neutron star that sends out regular, directed pulses of radiation like a lighthouse beam. A neutron star is a dead star that has lost most of its material in an explosion.

The finding was to be announced at a NASA teleconference today and will be detailed in the April 6 issue of the journal Nature.

Stars with about eight to 20 solar masses become neutron stars when they die. The stars run out of fuel as they age and their central cores collapse under their own immense weights.  Protons and electrons in the cores get compressed into a tight sphere of neutrons with about 1.5 solar masses all packed into a region the size of a city.

When infalling matter from the imploding star's outer layers reaches this neutron core, it bounces back and generates a powerful shockwave that blasts away the star's outer mantle in a stellar explosion called a supernova.

If material cast off from the explosion doesn't have enough velocity to escape the star's gravitational grasp, it will stall and fall back.

"It's like throwing a baseball straight up into the air," said study team-member Deepto Chakrabarty from the Massachusetts Institute of Technology (MIT). "Unless you're throwing it really, really fast, it's eventually going to fall back down on you."

This so-called "fallback" material can land back on the neutron star's surface or coalesce into a spinning debris disk around the star.

If the fallback material lands back onto the neutron star, it can cause the star to become a black hole. Scientists think this happens when a neutron star exceeds about three solar masses.

"Suppose you form a neutron star that is close to the upper limit. If enough stuff falls back, it'll push the star over this limit and a black hole will form," Chakrabarty told SPACE.com.

Black holes are typically thought to form from the gravitational collapse of stars that have more than about 20 solar masses. These stellar giants bypass the supernova explosions and the neutron star stage to immediately become black holes.

If the fallback material instead forms a spinning disk around the neutron star, it can become fodder for the formation of new planets, the scientists say.

"This discovery demonstrates that the planet-creation process is a very robust and a very universal one," said Aleksander Wolszczan, an astrophysicist from Penn State University who was not involved in the finding.

In 1992, Wolszczan's team discovered a trio of rocky worlds around a fast-spinning pulsar. The finding was the first confirmed detection of planets beyond our solar system.

Planet formation around neutron stars would work similar to young stars, except that rocky planets would be favored over gas giants and the entire process would happen more quickly.

One reason for this is that material in the debris disk of neutron stars is more chemically evolved than material created in younger stars.

"The stuff that explodes from a supernova has all been processed through the nuclear engine in the middle of a star so you end up with lots of heavy elements," said study team member David Kaplan, also from MIT.

Forming gas giants like Jupiter is more difficult around neutron stars because their debris disk contains less of the light elements, such as hydrogen and nitrogen, than is found around the disk of normal stars.

"If you have a metal rich environment, it's not that hard to make rocky planets out of it in a very short time," Wolszczan said in a telephone interview.

Another reason for favoring rocky planets is that there just isn't enough material in a neutron stars debris disk to form anything else. Scientists think that a planet must have at least 10 Earth-masses before it has enough gravity to become a gas giant planet. However, the total mass of the debris disk that the researchers discovered around pulsar 4U 0142+61 is only about 10 Earth-masses.

Despite being rocky, pulsar planets would be permanently strafed by high-energy radiation, so there's little chance of life evolving on them, scientists say. At least not the carbon-based life found on Earth.

"But if you're the type that agrees we don't really know what life is in the broad sense, then I have no idea," Wolszczan said.