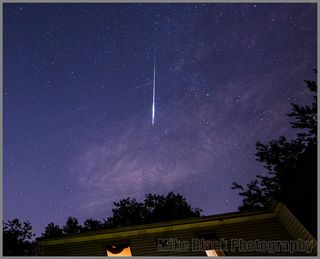 The potentially dazzling Perseid meteor shower will hit its peak this weekend, and you don't have to have clear skies to catch the annual celestial fireworks display. You can watch it online on Saturday and Sunday (Aug. 10 and 11).

You can watch the Perseid meteor shower webcasts live on SPACE.com, courtesy of NASA and the Slooh Space Camera. Stargazers and NASA scientists have also already captured photos of the Perseids this month. [How to See the 2013 Perseid Meteor Shower]

The Perseid meteor display occurs every August is typically one of the most dependable displays of "shooting stars" of the year. The meteor shower is caused by leftover bits of the Comet Swift-Tuttle. As the Earth passes through the Swift-Tuttle's dusty trail, the comet debris slams into the planet's atmosphere and flares up in brilliant meteors or fireballs.

This year, the Perseids will peak in the overnight hours between Sunday and Monday (Aug. 11 and 12), but there are chances to see meteors from the event just before and after the peak, NASA officials said.

"Rates can get as high as 100 per hour, with many fireballs visible in the night sky," NASA officials said in a Perseids webcast announcement. 'Early in the evening, a waxing crescent moon will interfere slightly with this year's show, but it will have set by the time of the best viewing, just before dawn.'

During NASA's Saturday night webcast, the agency's meteor expert Bill Cooke and colleagues Danielle Moser and Rhiannon Blaauw from the NASA Meteoroid Environment Office at Marshall Space Flight Center in Huntsville, Ala., will be online to answer questions on the meteor shower in a chat forum. You can join the forum chat at 11 p.m. EDT by visiting here: http://www.nasa.gov/connect/chat/perseids_2013a.html

NASA's Perseids webcast will be provided by a live video feed from an all-sky camera at the Marshall Center.

"The live feed is an alternative for stargazers caught with bad weather or light-polluted night skies," NASA officials explained. "The camera activates at full dusk (approx. 9 p.m. EDT). During the day you will either see a dark gray box or pre-recorded footage."

If you miss NASA's Saturday night webcast, you can catch more views of the Perseid meteor shower from the Slooh Space Camera, an online service that allows stargazers to gaze at the universe through remotely operated telescopes.

"We will pull a live feed from our amazing all-sky camera located on the top of Mt. Teide in the Canary Islands, off the coast of west Africa, over 8,000 feet up where skies are nice and dark," Slooh President Patrick Paolucci told SPACE.com. You can watch the feed on SPACE.com and directly from Slooh via the Slooh Space Camera website.

In addition to watching this weekend's meteor display, you can also try to hear the Perseid meteor shower using radio equipment. In Chile, astronomers at the Gemini Observatory's Gemini South telescope also planning to fire lasers into the meteor trails to probe the dusty "celestial pollution" of the Perseids to help fine-tune their adaptive optics system that cancels out the interference of Earth's atmosphere in their night sky observations.