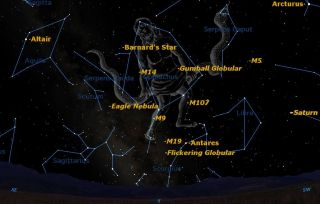 Sometimes when I look skyward on midsummer evenings, I can hear the theme song from the popular syndicated television show "M*A*S*H" in my mind.

That happens because at this time of the year we can see what we might call the ancient version of the show’s main character, Hawkeye, dominating our southern night sky — a celestial medicine man.

"M*A*S*H" is an acronym for Mobile Army Surgical Hospital, and there is a connection between the medallion that an army doctor wears and our physician among the stars. [Best Night Sky Events of August 2013 (Sky Maps)]

Physicians and other healthcare professionals have long taken the Hippocratic Oath, swearing to practice medicine honestly. The oath is named after the ancient Greek physician Hippocrates (460-377 B.C.), often regarded as the father of medicine, and it begins like this:

"I swear by Apollo Physician and Aesculapius and Hygeia and Panacea and all the gods and goddesses, making them my witness, that I will fulfill according to my ability and judgment this oath and covenant."

And facing due south this week about 90 minutes after sunset, we can see the star figure that is dedicated to the aforementioned physician Aesculapius. It is the large constellation of Ophiuchus (The Serpent Holder).

King James I of England, who reigned in the 1600s, once referred to Ophiuchus as "a mediciner after made a god," because the Serpent Bearer was often identified with Aesculapius. And Aesculapius, in Greek mythology, was originally a mortal physician who never lost a patient by death.

But why the name Ophiuchus? This odd moniker derives from the Greek roots "ophis" (serpent) and "cheiro-o" (to handle).

In Greek lore, Ophiuchus is often portrayed as the physician Aesculapius and his snake. In the sky, in fact, the man and the snake are two separate constellations, the Snake being represented by Serpens. Serpens is the only constellation that’s cut in two. The head of the Serpent lies west (to the right) of Ophiuchus and is known as Serpens Caput, while to the east (left) of Ophiuchus lies the smaller Serpens Cauda, the tail.

Ophiuchus is a rather large and complex group of stars chiefly of faint and medium brightness. The Serpent Holder resembles a large, upended oblong framework with a peaked roof marked by its brightest star, the second-magnitude Rasalhague, which is Arabic for "the head of the serpent collector."

The serpent’s head is a pretty little star pattern south of the tiara-shaped Northern Crown. To the naked eye, four stars brighter than magnitude 4.5 mark the head of Serpens. The three brightest — Beta, Gamma and Kappa Serpentis — are set in a nearly equilateral triangle.

Off to the south is the location of Messier 5, one of the finest globular clusters in the night sky. Believed to contain more than 500,000 stars, M5 can be seen without optical aid as a fuzzy "star" on a very dark, clear night. Small binoculars show a tiny fuzzball. Powerful binoculars (10x70 power and up) show the cluster rapidly brightening toward the center with perhaps the slightest hint of a mottled texture.

Serpents have long been regarded as sources of healing; the association may have come from the belief that, by shedding its skin, a snake is rejuvenated. And in fact, Aesculapius’ serpent has been incorporated into the caduceus, that universal medical emblem depicting snakes coiled around a rod. [Photos: Snakes of the World]

The caduceus is still the symbol of the medical profession. It is on the insignia of the U.S. Army’s Medical Corps — the very same medallion that is worn by the surgeons on "M*A*S*H."

As to how Aesculapius ended up in the sky, there is a saga connected with several other constellations — namely Scorpius (The Scorpion), Orion (The Mighty Hunter), Orion’s two dogs (Canis Major and Canis Minor), as well as Lepus (The Hare).

As the story goes, Orion was supposedly a braggart who claimed that no animal could defeat him. This annoyed the Greek goddess Hera, who sent Scorpius to kill Orion with his venomous sting. While Orion was pursuing a hare with his two faithful dogs, Scorpius made his move and stung the hunter in the heel, killing him.

Word quickly spread about the death of the famed Mighty Hunter. Aesculapius arrived on the scene and, using some of the medical secrets he got from the serpents, was able to revive Orion. But this piece of news alarmed Hades, the god of the dead, who prevailed on his brother Zeus, the king of the gods, to do something.

After considering Hades' pleas, Zeus killed Aesculapius with a thunderbolt. And to set things right in the overall scheme of things, Zeus also killed Orion, this time for good.

Zeus then transported all the earthly characters involved up among the stars.

Orion and his dogs — as well as the hare they were pursuing when Orion had his fatal encounter with Scorpius — Aesculapius, Serpens and the Scorpion all became a part of the starry firmament. And as an extra added precaution, Sagittarius (The Archer) stands guard next to the scorpion, his bow and arrow aimed directly at Scorpius to assure that he never touches Orion again.

In fact, Scorpius and Orion are on opposite sides of the sky. Scorpius lies directly under the feet of Ophiuchus in the summertime sky, while Orion dominates the winter sky with the hare crouching under Orion’s feet.

Finally, we should mention the two other names in the oath, Hygeia and Panacea, for they were Aesculapius’s daughters. Although not represented in the sky, both have long been patron saints to modern-day physicians, like their father.

Joe Rao serves as an instructor and guest lecturer at New York'sHayden Planetarium. He writes about astronomy for Natural History magazine, the Farmer's Almanac and other publications, and he is also an on-camera meteorologist for News 12 Westchester, N.Y. Follow us @Spacedotcom, Facebook and Google+. Original article on SPACE.com.