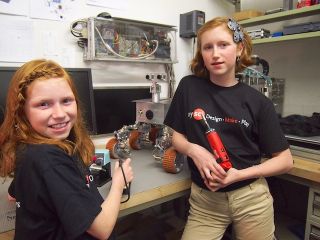 A sister act in North Carolina has proven that age is no obstacle when it comes to building a Mars rover.

The girls designed, developed and built the scale-model rover with the help of their father, Robert Beatty. Their mechanical creation will be unveiled Saturday (Aug. 10) as part of an interactive Mars exhibit at the New York Hall of Science in New York City. [See more photos of the Beatty sisters' homemade Mars rover]

"I started taking things apart: remotes, little remote-controlled cars, little clocks," Camille Beatty told SPACE.com. "It amazed me how it all fit together, and it made a loop, a circuit. I would ask my dad questions: 'What does this red wire mean? What does this black wire mean? What happens if they touch?' The more I asked questions, the more we got into it together."

After working with the simple circuits for a while, the Beattys started building robots when Camille was 11 years old. Since that time, the family has created about 12 to 15 bots from their home in Asheville, N.C.

Camille, Genevieve and Robert will visit the New York Hall of Science Saturday (Aug. 10) to demonstrate their Mars rover, which was commissioned by officials from the museum earlier this year.

Kids and adults who visit the exhibit can control the Beattys' rover, driving it around on a simulated hunt for life on the surface of the Red Planet. The rover's infrared camera, sonar sensors, thermal array sensor and other technology help the rover roam around the exhibit in search of infrared-light-emitting rocks that signal evidence of "past life" in the exhibit.

"It's a good way for kids to learn about science and robots and space," Genevieve Beatty told SPACE.com. "I learned a lot by building all these robots."

Camille and Genevieve were inspired to try their hand at creating a rover after watching a documentary about the rovers on Mars. Like Spirit (and its still-functioning twin, Opportunity), the rover is equipped with functioning solar panels, but unlike its counterpart on Mars, the Beattys' bot does not have an arm.

"We have built an arm, and we have an arm in our workshop, but … because we knew it was going to be used all day, every day, we decided that the arm was an area of potential weakness, so we decided to keep it off," Robert Beatty told SPACE.com.

The scale-model rover to be unveiled at the New York Hall of Science is actually the second Spirit-inspired robot built by the Beatty family. The first was built for their enjoyment at home, but the new rover needed to be crafted with the exhibition in mind. For instance, the Beattys knew museum-goers would be playing with the robot for about eight hours a day, seven days a week, so they needed to design it so it would be able to stand up to the strain.

"Our early robots were just hobby-level — at-home kind of things," Robert Beatty said. "If they broke, it didn't really matter — we'd just fix it. Everything was a work in process. With this robot, we really had to focus on making it strong and robust, and really simple to use. It put us into a whole new area of learning."

The Beatty family recently built a miniature version of their Spirit rover and a robotic model of a Soviet-era Lunokhod moon rover for a museum in Prague, Czech Republic.