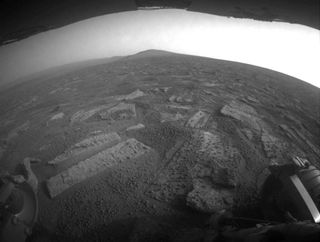 This view shows the terrain that NASA's Mars Exploration Rover Opportunity is crossing in a flat area called "Botany Bay" on the way toward "Solander Point," which is visible on the horizon.
(Image: © NASA/JPL-Caltech)

On the 10th anniversary of its launch, NASA's Opportunity rover on Mars is also celebrating reaching the halfway point in its drive from one crater-rim segment to another.

The Opportunity rover, which is still going strong on the Red Planet long after its official mission was slated to end, is journeying 1.2 miles (2 kilometers) from the spot it studied for the past 22 months, on the edge of Mars' Endeavour crater, to another area where it will begin a new phase in its research.

Sunday (July 7) marks the 10th anniversary of Opportunity's launch from Earth with its sister rover Spirit, which shut down on Mars in 2010. The rovers lifted off in 2003, and arrived at the Red Planet in January 2004. They were originally expected to operate for three months. [Latest Mars Photos from Opportunity Rover]

With its mission clock at nine years and counting, Opportunity is still uncovering secrets on Mars. The robot was last based at thesouthern tip of the "Cape York" segment of the 14-mile-wide (22 kilometers) Endeavour crater, and is now on its way to a spot called "Solander Point." It began the trip in mid-May, and has been driving for about six weeks.

To get from one area to the other, Opportunity has to cross a region called "Botany Bay."

"The surface that Opportunity is driving across in Botany Bay is polygonally fractured outcrop that is remarkably good for driving," Brad Joliff, an Opportunity science team member and long-term planner at Washington University in St. Louis, said in a statement. "The plates of outcrop, like a tiled mosaic pavement, have a thin covering of soil, not enough to form the wind-blown ripples we've had to deal with during some other long treks. The outcrop plates are light-toned, and the cracks between them are filled with dark, basaltic soil and our old friends the 'blueberries.'"

Blueberries are small, spherical hematite-rich formations that Opportunity first discovered when it landed at another crater, called Eagle.

Opportunity has now traveled more than 22 miles (35 kilometers) on Mars, and recently broke the U.S. off-Earth driving record, which had previously been set by the Apollo 17 moon rover, driven by astronauts Gene Cernan and Harrison Schmitt over 22.21 miles (35.74 km) of the lunar surface in December 1972.

If Opportunity keeps chugging along on Mars, it may eventually break the worldwide extraterrestrial driving record, which was set in 1973 by the Soviet robotic moon rover Lunokhod 2, which traveled roughly 26 miles (42 km) over the moon.

And Opportunity isn't the only NASA spacecraft roving on Mars. The Mars Science Exploration Laboratory rover Curiosity arrived on the Red Planet in August 2012, and is exploring the Gale crater area.