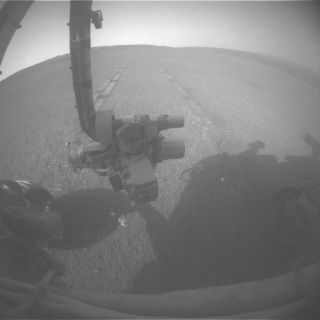 The six-wheeled Opportunity rover drove 263 feet (80 meters) on Wednesday (May 15), bringing its total odometry on the Red Planet to 22.220 miles (35.760 kilometers), NASA officials said. The previous mark had been held by the Apollo 17 moon rover, which astronauts Gene Cernan and Harrison Schmitt drove for 22.210 miles (35.744 km) across the lunar surface in December 1972.

"The record we established with a roving vehicle was made to be broken, and I'm excited and proud to be able to pass the torch to Opportunity," Cernan said a few days ago in a conversation with Opportunity team member Jim Rice, of NASA's Goddard Space Flight Center in Greenbelt, Md., space agency officials said.

Opportunity still trails another robot for the international distance record. The Soviet Union's remote-controlled Lunokhod 2 rover traveled 23 miles (37 km) on the moon in 1973.

The golf-cart-size Opportunity and its twin, Spirit, landed on Mars in January 2004 on three-month missions to search for signs of past water activity on the Red Planet. They found plenty of such evidence, then kept on roving.

Spirit stopped communicating with Earth in 2010 and was declared dead a year later. But Opportunity is still going strong, exploring the rim of Mars' Endeavour Crater.

Opportunity had been working at a section of the rim dubbed "Cape York" since the middle of 2011. But this week it began trekking toward an area called Solander Point, which lies 1.4 miles (2.2 km) away, NASA officials said.

So the rover could soon put Lunokhod 2 in its rear-view mirror, claiming the overall off-planet driving mark as well. Opportunity's handlers have said they'd like to add this milestone to the rover's resume, though science remains the mission's top priority.