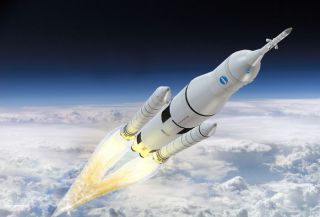 The huge rocket that NASA is building to blast astronauts toward Mars, asteroids and other destinations in deep space has passed a critical design milestone, agency officials announced today (Aug. 1).

"In two short years from the first announcement of the Space Launch System, we are at a milestone that validates the detailed design and integration of the system," Dan Dumbacher, deputy associate administrator for NASA's Human Exploration and Operations Mission Directorate, said in a statement. "You can feel the momentum of the workforce as we produce test hardware today. We are creating a national capability, and we will get this country, and the world, exploring deep space." [Photos: NASA's Giant Rocket for Deep-Space Flights]

Experts from around the country participated in the preliminary design review, examining about 200 documents and 15 terabytes of data, NASA officials said.

"The review had to be incredibly detailed, so our plans for vehicle integration, flight software, test, verification and operations will result in a safe, affordable and sustainable vehicle design," said Todd May, manager of the SLS Program at NASA's Marshall Space Flight Center in Huntsville, Ala.

The review marked the final step in the rocket's initial design and development phase. The next big hurdle to clear is called Key Decision Point-C, which will see the SLS program move from concept formulation to implementation, officials said.

NASA announced the SLS in September 2011. The rocket is designed to launch the agency's Orion capsule, which is also in development. The duo is slated to fly together for the first time in 2017, with the first manned flight scheduled for 2021.

The first incarnation of SLS will stand 321 feet (98 meters) tall and carry up to 70 metric tons of payload. But NASA plans to develop a modified SLS that would be the most powerful rocket ever built. This "evolved" version would be capable of blasting 130 metric tons into space, officials say.

The SLS and Orion are being developed to meet NASA's ambitious goals in deep space. In 2010, President Barack Obama directed the agency to get astronauts to a near-Earth asteroid by 2025, then on to the vicinity of Mars by the mid-2030s.

No human has traveled beyond low-Earth orbit since Apollo 17, the final mission in NASA's famed moon program, returned home in December 1972.