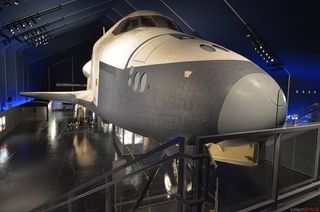 The second-annual SpaceFest kicks off in New York today (July 25) at the floating home of NASA's space shuttle prototype Enterprise.

Through the weekend, the Intrepid Sea, Air & Space Museum in Manhattan, located on the former U.S. Navy aircraft carrier Intrepid, will be hosting a series of space-themed events. Astronauts will be on hand to talk about what it's like to live, work and, well, go to the bathroom in orbit; a LEGO model of Enterprise will be unveiled; and Star Trek: The Motion Picture will be screened on the converted ship's flight deck.

The celebration comes just two weeks after the Intrepid opened its new Space Shuttle Pavilion, Enterprise's exhibition area. The original display debuted during last year's SpaceFest, but it had to be closed only a few months later when Hurricane Sandy hit New York and damaged the pavilion's enclosure beyond repair.

Highlights of this year's SpaceFest include:

Most events are free with museum admission and you can find the full schedule on the Intrepid's website: http://www.intrepidmuseum.org/SpaceFest2013.aspx

NASA used Enterprise in approach-and-landing test flights in the late 1970s. Though the test plane never went into orbit, it paved the way for the space shuttle program, which retired in 2011 after 30 years and 135 missions. Enterprise had been on display at the Smithsonian's National Air and Space Museum annex outside of Washington, D.C., until it was moved to the Intrepid in 2012.

The rebuilt pavilion is only a temporary home; the Intrepid plans to build a permanent facility to display the test shuttle near, but not on, the aircraft carrier.