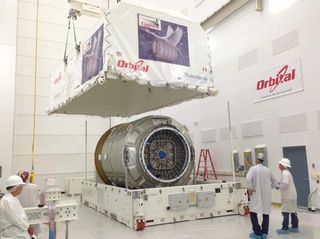 The initial unit was delivered to Orbital in 2011. Dulles, Va.-based Orbital is preparing the launch of the unit, which Orbital calls the Cygnus vehicle, in September aboard an Orbital-built Antares rocket under Orbital’s Commercial Orbital Transportation Services demonstration agreement with NASA. Orbital must complete the demonstration before its cleared to begin making regular cargo runs under an eight-flight, $1.9 billion Commercial Resupply Services contract NASA awarded the company in 2008.