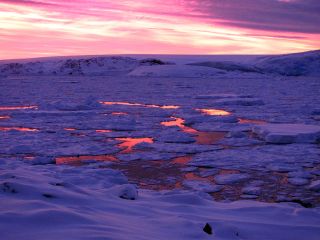 This twilight photo, taken at Palmer Station in Antarctica, hints at what the melting edge of an ice-covered hemisphere might look like around a tidally locked, terrestrial planet orbiting a red dwarf star. Much of such a hypothetical planet's water could get trapped in ice layers on the world's permanent night side.
(Image: © Perri Barbour/United States Antarctic Program)

A new study takes a deeper look into the fate of life-permitting water on Earth-like planets around red dwarf stars, the most common stars in the universe.

Many of these exoplanets quickly become "tidally locked," with one side always facing their reddish star while the other side freezes in permanent night.

The new research suggests that terrestrial, red dwarf-orbiting exoplanets with significantly less water than Earth might end up with almost all of their water "trapped" on the planet's night side, possibly hurting chances of supporting life in the planet's temperate regions. [See Photos of the Strangest Alien Planets]

On the other hand, this water-trapping phenomenon might boost an exoplanet's odds for life by keeping at bay a super-heating, runaway greenhouse effect that would otherwise eventually dry a planet out and doom extraterrestrial life.

Getting a handle on the habitability of Earth-like worlds around red dwarfs is important because this particular exoplanetary category should serve as the most readily accessible in our remote search for other beings.

"These worlds may well be among the first that we are able to probe and characterize for habitability," said Kristen Menou, an associate professor of astronomy at Columbia University and author of the new study accepted for publication in The Astrophysical Journal.

As many as three out of four stars in the Milky Way and other galaxies are red dwarfs. These cool stars possess anywhere from about a tenth to half the mass of the sun. The so-called habitable zone, the band around a star where water can exist in a liquid state on a planet's surface, is located very close to dim red dwarfs compared to our brighter, hotter sun — within the relative orbit of Mercury.

At this short distance, the gravitational interactions between a red dwarf star and its habitable zone planets likely lead to tidal locking, when the axial rotation of the planets matches the time it takes to completely orbit the star. As a result, these planets have a permanent day side and permanent night side. (To point to an example in our solar system, the moon is tidally locked to the Earth, thus showing us only one of its hemispheres.)

A common conception of tidally locked, Earth-like worlds around red dwarfs is that a great ocean of liquid water would dominate the daytime side. If the planet were hotter, that ocean might evaporate, creating a large land mass perhaps ringed by water along the temperate, day-night boundary line. The night side would be piled high with massive ice sheets and shelves.

Overall, the world, when viewed from the star's perspective, might look like a giant eyeball, and so these putative planets have been dubbed "eyeball Earths."

To find out, Menou used software called PlanetSimulator, developed at the University of Hamburg, to model the climates of tidally locked habitable worlds around red dwarfs. Crucially for Menou's explorations, PlanetSimulator can model a hydrological cycle, which is the movement of water throughout a planet's surface and atmosphere via the familiar processes of precipitation (rain and snow), evaporation, condensation (cloud formation) and so on.

The models revealed that for exoplanets with about as much water and receiving similar amounts of sunlit-heat as Earth, the general eyeball Earth picture remains more or less the same. "If you have abundant water like Earth or more on the surface in an ocean, then the standard view of the eyeball climate still holds," said Menou.

But for worlds with less than a quarter of Earth's water budget, the models show this small volume of water will preferentially precipitate and freeze away on the planet's dark half. Instead of an eyeball, with either a big oceanic "pupil" or circular, watery "iris" on its dayside, the world might be more two-faced, with arid sunlit and glacial benighted halves.

"If you don’t have too much water to start with, you can have the majority of it getting trapped on the night side," said Menou. "This raises questions about how much liquid would be available on the dayside, which of course speaks to habitability as water is key for life as we know it."

The prevailing moisture transport in the atmosphere on a tidally locked world would lead to massive glacial build-up on the planet's cold side. However, the thickness of this hemispheric ice cap would be limited by the inevitable melting that would occur at its base from the tremendous pressure of piling up so much heavy ice.

Menou's paper explores three nightside ice layer scenarios. For melting at its base, the ice layer might end up floating on a sub-glacial ocean that connects to a dayside ocean. If less surface water were on hand or the nightside temperatures were colder, part of the layer could be "grounded," or in direct contact with the rocky crust of the planet, with ice and water flows occurring onto the dayside at the sheet's edges.

In the third scenario with the least water or coldest nightside temperatures, the ice flows back into the dayside are very slow, leading to the water-trapped configuration. Yet even in the most water-trapped situation, a hydrological cycle to some degree would remain, with a modicum of melting and evaporation occurring at the ice sheet's periphery, followed by precipitation back on the nightside. [17 Billion Earths of the Milky Way Explained (Infographic)]

Accordingly, small pockets of habitability might remain on a water-trapped world. Much of that would depend on the parameters of the ice flow and melt, which would in turn depend on continental landmass arrangements and other variables such as dayside water flow.

"No matter how efficient you are at trapping water on night side, there always has to be some water on the dayside," said Menou. "Exactly how much there is on the dayside is unclear, as it depends on the shape of continents and the ocean basins."

The new paper points out that water-trapping might not be all bad news when it comes to giving alien life a sporting chance. Water-trapping could stop a greenhouse effect from feeding back on itself and heating a planet until its vaporized water escapes into space.

Some scientists speculate that Venus, which is basically like Earth but in a closer orbit, actually started out watery like the blue planet. As the young sun warmed up, it triggered a runaway greenhouse effect on Venus, stripping it of its water and sending Earth's twin down a path to hellish barrenness.

"Eventually you may boil off the oceans and the planet becomes non-habitable," said Menou. "With water-trapping, when you cannot put so much water into the atmosphere, then it's harder to essentially warm up your planet from the greenhouse effect, which is better for habitability."

The water-trapping principle could loom as a major determinant for habitability of red dwarf terrestrial planets, Menou said, because some research suggests planets around this class of star might start out relatively water-deficient compared to Earth as they aggregate out of a protoplanetary disk. "If these planets form like we think the Earth formed, they might have very little water," said Menou.

These planets could also lose a lot of water later in their evolution during the intense process of tidal locking. Before the day-night equilibrium sets in, the planet is subjected to tidal heating effects like those that warp and bend Jupiter's moon Io, warming its interior and triggering rampant volcanism. A warmed interior can lead to a hotter atmosphere, and for a red dwarf terrestrial planet the result could be the escape of substantial amounts of evaporated water into space. [Learn more about Jupiter's moons (Countdown)]

Because of the relatively small size of the star compared to the planet, the high frequency of planetary transits around a low-mass star, and the expected commonness and proximity of such worlds, red dwarf exoplanets should be among the first we get to study in detail with next-generation instruments, like the James Webb Space Telescope.

Most of this early characterization work will involve detecting the signatures of gases in exoplanetary atmospheres through spectroscopy, though there is some hope of collecting enough light to glimpse exoplanet surfaces, at least in the broad sense of discriminating between large regions of ice, water or rock.

Menou wondered to what extent the early observations might speak to exoplanetary climate and water-trapping.

"The issue is can you distinguish observationally between a world with abundant water that would not suffer from this risk of trapping, versus one deficient of water that might be subject to trapping?" asked Menou. "At this point I think it's unclear, but I think it's important that we start thinking about these things now. These planets may be the most promising for which we might be able to say something observationally about their habitability in the near future."