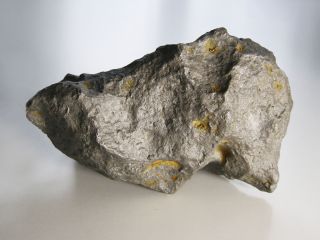 A close-up of the Campo del Cielo meteorite starring in the art exhibition "Campo del Cielo, Field of the Sky" by artist Katie Paterson in theTurner Contemporary gallery in the U.K. Paterson hopes to launch the meteorite back into space on a European cargo ship bound for the International Space Station.
(Image: © K. Paterson)

An artist working with a 4.5-billion-year-old meteorite wants to send it back to space.

Katie Paterson has been using a large iron meteorite from Argentina in one of her installations titled "Campo del Cielo, Field of the Sky." But in 2014, she'll be ready to send a small piece of it back into outer space aboard an unmanned European Space Agency (ESA) cargo-carrying spacecraft bound for the International Space Station.

"By sending it back to space, I hope to fire the imaginations of students, youth — anyone, really — and foster a discussion on our relation with the wider universe," Paterson said in a statement.

The space rock used by Paterson in her installation was re-forged into a version of itself. Paterson crafted a mold of the meteorite and melted it down. She then poured the molten rock into the mold and allowed it to cool and harden back into its original shape.

"The iron, metal and dust inside have been reformed, and the layers of its cosmic life span — the intermixing of space and time, the billions of years of pressure and change — have become collapsed, transformed and then, by the hand of human technology, renewed," Paterson said.

You can watch a video detailing the making of the meteorite art piece on SPACE.com.

The meteorite itself comes from a group of iron space rocks known as the Campo del Cielo meteorites found in Buenos Aires, Argentina. The site is home to at least 26 craters estimated to be about 4,000 to 5,000 years old, ESA officials said.

ESA officials will assess if the small piece of the meteorite qualifies for flight, and if it passes those tests, it will be sent into space aboard the European cargo vessel in 2014.

"I hope this helps inspire people everywhere to think about the really big questions: the origin of life, the natural history of our solar system and home planet, and our relationship with time, both geological and cosmic," Detlef Koschny, who is responsible for near-Earth object activities at ESA's Space Situational Awareness office, said in a statement. "These are important questions, and space exploration, together with art, are helping us answer them."

Paterson will speak at the Turner Contemporary gallery in the U.K. on July 30.