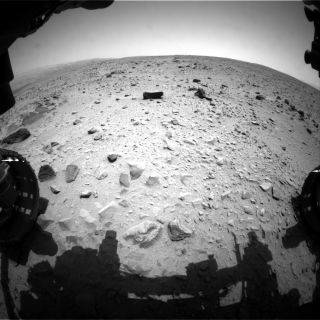 "When I saw that the drive had gone well and passed the kilometer mark, I was really pleased and proud," rover driver Frank Hartman, of NASA's Jet Propulsion Laboratory in Pasadena, Calif., said in a statement. "Hopefully, this is just the first of many kilometers to come." [Curiosity's Latest Amazing Mars Photos]

Curiosity is in the early stages of a long trek to the base of Mount Sharp, which rises 3.4 miles (5.5 km) into the Red Planet sky. The targeted foothills lie about 5 miles (8 km) from Curiosity's current location as the crow flies, and it will likely take the six-wheeled robot — which has a top speed of 0.09 mph (0.14 km/h) — about a year to cover the ground, mission team members have said.

Curiosity touched down inside Mars' 96-mile-wide (154 km) Gale Crater on Aug. 5, 2012, kicking off a planned two-year surface mission to determine if the Red Planet has ever been capable of supporting microbial life.

The car-size robot didn't stray far in its first 11 months on Mars, finding happy scientific hunting grounds close to its landing site. Indeed, mission scientists announced in March that Curiosity had already accomplished its primary goal, finding that an area called Yellowknife Bay was habitable billions of years ago.

But Mount Sharp's lower reaches have long been Curiosity's ultimate destination. The mission team wants Curiosity to read the history of Mars' changing environmental conditions like a book as the robot climbs up through Mount Sharp's many layers.

The long haul to Mount Sharp should vault Curiosity past NASA's Spirit rover, which logged 4.8 miles (7.7 km) on the surface of Mars between 2004 and 2010. But Curiosity will still be a distant second to Spirit's twin, Opportunity, whose odometer reads 23.35 miles (37.58 km) — and counting.

The golf-cart-size Opportunity, which is currently making its way toward a site called Solander Point to wait out the Martian winter, holds the American record for distance driven on the surface of another world. But the overall champ is the Soviet Union's remote-controlled Lunokhod 2 rover, which tallied 26 miles (42 km) on the moon back in 1973.