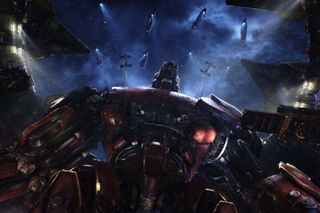 The robots in "Pacific Rim," a science-fiction film by Guillermo del Toro that comes out today (July 12), are roughly human-shaped, but as tall as a skyscraper and able to run, jump, fight and travel through water and upper Earth orbit.

The bigger something is—whether animal or robot—the weaker it becomes proportional to its body weight. [See also: Designers of Giant Robot Hope for Imitators]

Say, for example, that you wanted to build a robot that is 10 times the height of an average human while maintaining human proportions. You also want to make this robot capable of jumping a height equivalent to the distance between its knees and the ground. The distance between knees and ground is also 10 times bigger for that robot than it is for the human, so you have to move 1,000 times the weight 10 times as far, which equals 10,000 times the energy requirement.

This basic problem holds for nature as well as mechanics, said Ruina. That's why even dinosaurs never grew bigger than species such as amphicoelias, which scientists believe was 40 to 60 meters in length and weighed up to 135 tons. "Certainly there's an advantage for animals being bigger—they can eat, squash, chew—but animals are only so big.  When they get bigger they have a harder time dragging around their own weight. It's a little bit counterintuitive—you'd think it'd balance out but it doesn't."

This principle also means that a giant human-shaped robot would certainly be stronger than a regular human in terms of the amount of mass it's able to lift, but with regard to its own body mass the giant robot is actually weaker.

None of this is to say that giant robots are necessarily impossible.

"Let's say you're very good at engineering and you know how to make robots really well—which we [humans] do not—[and] you say, 'Okay, I want to make bigger and bigger robots,'  [then] you're going to need better materials and better energy sources."

What kind of materials would be both strong and light enough to make a giant robot?

Weight is the critical issue. Steel is strong, but it's too heavy—its strength proportional to its weight is far too weak to create a giant, heavy robot.

"Beryllium is the best choice in theory," said Jekanthan Thangavelautham, a robotics postdoctoral associate at the Massachusetts Institute of Technology. But he added that the metal's toxicity—it's corrosive to human skin and in dust form can be lethal when inhaled—could pose a problem. Titanium is another alternative, as is carbon- reinforced plastic.

As noted, a giant robot would need to be made with extremely strong, rigid materials to support its weight.  Therefore giant robots "can't be nimble nor be dexterous," Thangavelautham said, because the materials necessary to make them would in turn "slow these systems down."

The way weight and strength increase with respect to size also means that both animals and robots' energy needs increase exponentially the larger they become.

Conventional fuel sources, even with vastly improved efficiency, wouldn't be enough to move a "Pacific Rim"-size robot more than a few steps per tank load.

"In terms of the scale of challenges, how to feasibly power these devices while remaining lightweight is a major problem in a class of its own," Thangavelautham said. "Exotic energy sources are both the main challenge and breakthrough technology that could make this type of stuff reach reality."

"Portable fission reactors are used to power aircraft carriers, but they would still need to be miniaturized and power density significantly improved to even have these robots just walk," Thangavelautham said.

"The ability to fly or jump significant distances I highly doubt would be feasible even with current fission reactors and I have to say is science fiction fantasy," he said.

Giant robots pose giant engineering challenges.  But there's an even more basic problem that scientists have yet to figure out for robots of any size.

Humans have made robots capable of high-order mathematical calculations, of driving over Mars and communicating wirelessly over long distances. But what about a robot that can walk without falling over?

The ability to walk is a perfect example, Ruina said. "There's no one who, when asked 'how do you walk,' can give a coherent answer in a scientific sense."

In the past several years there have been several robots capable of walking over certain types of terrain. However, none of them approach the grace or functionality of their mobile biological counterparts.

Walking, running, and other skills that humans and animals don't even consciously think about are some of the most difficult to replicate in robots. "These are advanced abilities that all animals have that are way below our conscious understanding and way above our ability to consciously understand," Ruina said.  "So far."

The future isn't here yet

None of these problems are insurmountable. But they would require years of experimentation and millions of dollars in research funds, not to mention a handful of scientific breakthroughs, in order to accomplish.

The truth is, "we'd have trouble just popping a robot of any size into action right now," Ruina said.

We can grant that in the "near future" in which the movie takes place that might be possible, of course.  However, if monsters like the ones in "Pacific Rim" were to show up in the next week or so, giant fighting robots probably aren't going to be humanity's best chance for survival.