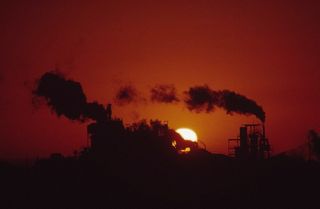 The Anthropocene is the name of a proposed new geological time period (probably an epoch) that may soon enter the official Geologic Time Scale. The Anthropocene is defined by the human influence on Earth, where we have become a geological force shaping the global landscape and evolution of our planet.

According to this idea, the present epoch — still known as the Holocene, which started 11,000 years ago — would have ended somewhere between the end of 18th century and the 1950s (when the Anthropocene began). The earlier time limit considers the increasing amount of carbon dioxide and other greenhouse gases in Earth’s atmosphere that is mostly due to the burning of fossil fuels for energy to power our growing industrial technology.

We may consider this process to have started in 1784, with the invention of the steam engine by James Watt. The present high levels of greenhouse gases in our atmosphere are probably causing global warming. The later time period takes into account the increasing background radiation from the nuclear tests by the United States and the Soviet Union during the beginning of the Cold War. [8 Ways Global Warming Is Already Changing the World]

This new frontier in the geological timeline is potentially more precisely defined than any was before due to its recent occurrence. The Antrhopocene is also supported by increasing evidence of human influence on natural global processes, such as the sediment transport being supplanted by our construction processes; land occupation and transformation; water course deviation and water reserve appropriation; massive extinction and introduction of invasive species; development and widespread use of previously non-existent chemical substances (eg. plastics and persistent organic pollutants); and even the creation of new elements (the last 20 in the periodic table).

Q: The Anthropocene concept has been slowly emerging in science due to comments from Antonio Stoppani in 1873 (Anthropozoic era), LeConte in 1879 (Psychozoic), Pavlov in 1922 (Anthropogene) and Vernadsky in 1962 (Noosphere). Eugene Stoermer and Paul Crutzen formally addressed the concept and introduced the Anthropocene term in the title of a paper for the Global Change Newsletter in 2000. Could you tell us when and how you got involved with the topic?

David Grinspoon: It’s a topic I’ve long been interested in. Even as a kid enthralled with science fiction, I wondered about the role of people in the long-term evolution of the Earth, the far future and the fate of humanity. And thinking about advanced life elsewhere in the universe also leads us back to wonder about how long a civilization can last, which raises the same questions. [10 Wildest Ways to Contact Aliens]

In my PhD thesis, written in 1989, I discussed the fact that when a civilization develops the technology to prevent catastrophic asteroid impacts, it marks a significant moment in the evolution of the planet. And the book I’m writing now I actually started even before I finished my last book in 2003. It’s a natural sequel because in the end of that book I speculate about what the coming of "intelligence" and "civilization" mean for Earth and other planets.

So even though "Anthropocene" is a recently popular term for this concept, I’ve been thinking and writing about it for over 20 years. I’m so happy that it’s becoming such a central topic of discussion in the worlds of science, policy and environmental activism. It’s about time!

Q: What should be considered the geological marks of the Anthropocene?

DG: There are a number of reasonable suggestions for this, but my favorite is the signature of the first atomic bomb tests. This produces a signature, both isotopic and in terms of new geological structures, that cannot be interpreted in any other way. And the symbolism is so potent — the moment we grasped that terrible promethean fire that, uncontrolled, could consume the world.

Now, it’s true that humans were altering the Earth before this time, as several scientists have pointed out — for example, land use, agriculture, urbanization and atmospheric carbon dioxide. But, you know, other species have come along and changed the world before and we don’t name a geological epoch after each of them.

What is really different now is that we are aware of our world changing role. Or potentially aware — some of us are at least. So for me, regardless of how you define the Anthropocene, this is when it gets interesting — when the mass of humanity starts to wake up to our world-changing role. And after the Bomb, certainly after Hiroshima, we could not see ourselves, with our world-changing technology, the same again.

Q: How likely is the possibility that we are now living through the planet's sixth mass extinction event? Is it already big enough to be detected in a future paleontology effort using our present methods and capabilities of investigation?

DG: I have heard differing opinions on whether or not the sixth great extinction is assured at this point, but either way it is obvious we are having a significant impact on the evolution of life on this planet and many species have not, will not, survive our presence here. Our impact will be detectable for the rest of time on this planet. [Wipe Out: History's Most Mysterious Extinctions]

For example, it is clear that the existing coral reefs on the planet will not survive our impact. We are going to lose them. This is inevitable now because of ocean acidification even in the best-case scenario.

It is slightly comforting that the reefs have disappeared before, due to past episodes of acidification, and they have returned. So they may be back in the future, but there will be a time of no coral reefs in Earth history that will forever be traceable to the actions we are taking now.

Q: Do you believe the Anthropocene should be classified as a new geological epoch within the Quaternary period, or does it stand for a larger time scale? Might the establishment of the Anthropocene geological time period include the presently known Holocene epoch?

DG: One interesting question about the Anthropocene is how long it might last. Geologically, will it be an event like the K/T boundary [which marks the extinction of the dinosaurs 65 million years ago], an epoch like the Paleocene or a transition like the origin of life?

I think it will either be a brief event recording the failed experiment of our so-called civilization, or it will be a transition to an entirely new planet in which intelligent life has a permanent role in managing the planet. But if we call it an epoch it represents an ambition for our species that is somewhere between these two extremes, and maybe that is OK for now.

Q: How do you rate the chances that the Anthropocene Study Group — established in June of 2009 — can convince the International Commission on Stratigraphy (ICS) in its 2016 meeting to add the Anthropocene epoch to the Geologic Time Scale?

DG: I don’t know. To be honest, I haven’t been following this too closely. It’s really not that interesting to me whether or not it becomes formally adopted as part of the geological time scale. What I’m interested in is the conversations going on about the Anthropocene and what it means to view ourselves as a part of Earth’s geological history. These conversations will continue regardless of what this Commission decides.

Q: We can now observe the role of exotic species in many habitats around the world, usually disrupting the local ecology where they were introduced by man. Do you see the growth of development and usage of transgenic organisms, nano-robots and even artificial (synthetic) life as possible key factors that will influence Earth’s biota in the near future?

DG: Yes, certainly. As you’ve pointed out we have already become an unprecedented kind of disruptive force in biological evolution, through our purposeful and inadvertent transport of species around the planet. With these new technologies we will have the capacity to much more dramatically affect the mechanics of evolution.

Q: If humanity became extinct (or reduced to nearly that point) today, would the lack of maintenance of our nuclear facilities, biological warfare and disease-control laboratories have a large effect on the biosphere?

DG: The breakdown of the nuclear facilities would lead to some local disturbances for a long time, but I don’t believe there would be any large global effects from this. I think the biggest signature would be the perturbation to the carbon cycle, which will take tens of thousands of years to repair itself.

The ocean will be acidified for a similar timescale with massive effects on reefs and other biomes. The hydrological cycle will gradually return to normal as dams break down.

Q: How do you see the possibility of the Anthropocene marking a period when humankind not only became a geological force on Earth, but also began to reach the other bodies in the solar system as a first step to largely expand its zone of influence?

DG: I don’t see it as coincidence that the great acceleration of the Anthropocene influences on Earth came during the same decades as our first exploration of the other planets. All this represents a certain phase in our technological development; I almost said "maturation" but I don’t think we can make this claim yet.

It is the same wave of technological advances that allowed us to make nuclear missiles, truly span the globe with telecommunications, commerce and rapid industrial expansion, develop the capacity to monitor our own planet from orbit and also launch spacecraft to the other planets.

Hopefully the perspective and wisdom gained from exploring the planets and seeing our own planet whole, from a distance, will facilitate the changes in behavior and outlook we will need to survive this precarious transition we are experiencing — the transition to being a self-aware, technological species with the capacity to either destroy our own civilization or ensure our long term survival.

Author’s note: This article is a tribute to Eugene F. Stoermer, who coined the term Anthropocene in the 1980s and is an inspiration for a whole legion of new researchers (I speak as one of his fans from Brazil). I offer my condolences to all his family and friends.