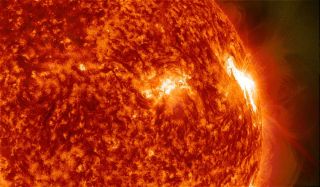 Astronomers have detected exotic antimatter particles flying from the sun during solar flares — a discovery that could help scientists understand this mysterious sibling to matter.

Solar flares were predicted to release some antimatter particles among the deluge of charged particles spat out during these eruptions. But this is the first time researchers have observed antimatter coming from the sun.

Antimatter particles have the same mass and other characteristics as their regular-matter counterparts, but they have opposite charge. When the universe was born about 13.8 billion years ago in the Big Bang, there was probably about as much matter as antimatter, scientists think. Somehow, collisions with matter destroyed most of the antimatter (when matter and antimatter meet, they annihilate), leaving a slight surplus of matter, which became the planets, stars and galaxies in our universe. [Sun Unleashes Biggest Flares of 2013 (Photos)]

Studying natural sources of antimatter in the universe today may help researchers understand why antimatter lost that battle to matter all those eons ago.

"That such particles are created in solar flares is not a surprise, but this is the first time their immediate effects have been detected," scientists wrote in a statement from the New Jersey Institute of Technology, the home institution of study leader Gregory D. Fleishman, who will present the findings this week at the 44th meeting of the Solar Physics Division of the American Astronomical Society in Bozeman, Mont.

The study detected antimatter particles called positrons — the antimatter partners to the mundane electrons that populate normal atoms. Powerful processes on the surface of the sun had ejected the particles, speeding them up to near light speed. Interactions of atomic nuclei, which the solar flare had accelerated, likely created the positrons.

Solar flares erupt on the sun when pent up magnetic energy is released, causing the sun to brighten and pour out powerful radiation.

To detect the positrons, Fleishman and his colleagues used NASA's Solar and Heliospheric Observatory (SOHO) and observations from Japan's Nobeyama Radioheliograph to study the polarization, or orientation, of radio light emitted by solar flares.