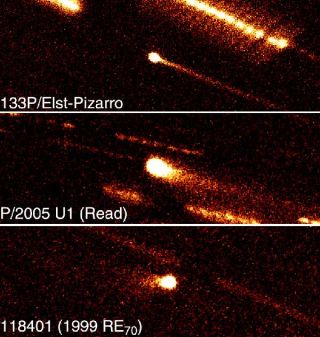 Images of the three known main-belt comets (at center of each panel). Other objects shown are stars and galaxies smeared by the motion of the telescope while tracking each comet.
(Image: © H. Hsieh and D. Jewitt/Univ. Hawaii.)

Icy comets embedded the in belt of asteroids between Mars and Jupiter may point to the origin of Earth's own water supply, scientists said Thursday.

Three comets exhibiting quite uncomet-like behavior have been found orbiting the Sun in a manner more expected of rocky asteroids. Dubbed "main-belt comets" by researchers, the objects suggests that comets and asteroids share more in common than previously thought, and that water found on Earth may have also taken root in the asteroid belt.

"It's just the tip of the iceberg," said University of Hawaii astronomer David Jewitt in a telephone interview. "We said in our study there may be hundreds of them out there, but there could be thousands."

Asteroids tend to be made of rock and metal. Comets, which typically spend most of their existence beyond Neptune and visit the inner solar system infrequently if ever, hold more water ice and other icy chemicals and are often called icy dirtballs.

Jewitt and graduate student Henry Hsieh, who led the study, used the Gemini North Telescope atop Hawaii's Mauna Kea to find that on object dubbed Asteroid 118401 was not really an asteroid at all.

Their observations found the "asteroid" was ejecting dust like a comet. The Nov. 26 discovery came one month after a similar object was discovered by the Spacewatch project in Arizona. Astronomers have known of a third comet-like object, 133P/Elst-Pizarro, for about 10 years; it no longer seems an isolated oddball.

"The main-belt comets are unique in that they have tight, circular, asteroid-like orbits, and not the elongated, often tilted orbits characteristic of all other comets," Hsieh said in a statement. "At the same time, their cometary appearance makes them unlike all other previously observed asteroids."

The research was detailed March 23 in the online version of the journal Science.

Astronomers believe that the Earth formed under hot and dry conditions, relying on ice from comets to build up its stores of water and become habitable. But studies of traditional comet ice have found that their water composition is quite different that that of Earth's oceans, Jewitt said.

Main-belt comet ice appears to have formed while the solar system was still a vast protoplanetary nebula of raw material under much warmer temperatures than the conditions where traditional comets formed, out in the Kuiper Belt on the frigid fringe of our planetary neighborhood, Jewitt said.

Because of their proximity, main belt comets could have served as a major source for Earth's water, the researchers said.

More study is needed to determine if the main-belt comet ice is chemically similar to that found on Earth. To do that, Jewitt says, a full-sky survey is required to scan the myriad asteroids in the for other comet-like objects.

Since main-belt comets are somewhat predictable in their orbits and relatively close to Earth, they might even prove attractive targets for future missions.

"These guys are close astronomically, so yes, we could probably do something with a spacecraft," Jewitt said.