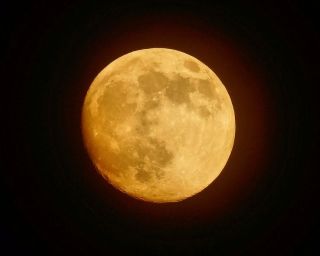 Paul D. Spudis is a planetary geology and remote sensing expert at the Lunar and Planetary Institute in Houston. This article was adapted from his post "Risky Business: ISRU and the Critical Path to Mars"on his Spudis Lunar Resources blog. He contributed this article to SPACE.com's Expert Voices: Op-Ed & Insights.

In examining the plans NASA devises for human missions beyond low Earth orbit, in-situ resource utilization (ISRU) experiments or demonstrations are sometimes included — but never incorporated into — the imperative of the mission sequence, or what engineers call "the critical path." ISRU simply means that you make stuff you need in space from resources available in space.

At current levels of development, such stuff would largely consist of high-mass, low-information materials, such as propellant and shielding. By reducing the amount of mass launched from the Earth through the use of ISRU techniques, the United States would save many billions of dollars of its limited space budget. So why isn't the public hearing more about this?

Certainly nothing in the chemistry or physics of ISRU indicates that it is impossible or unduly futuristic — most processes date back to antiquity (such as melting ice into water) or, at latest, to 18th- and 19th-century industrial chemistry (e.g., carbothermal reduction). But no one has actually attempted ISRU with extraterrestrial materials and real hardware in space. In other words, aerospace engineers haven't done it; to them, the concept is more from the realm of science fiction. ("Set the replicators on beef stew tonight, Mr. Sulu!"). They reactively imagine potential disasters resulting from the effort, rather than appreciate its possible benefits.

Engineers tend to be cautious when undertaking new designs that incorporate untried techniques, and in the case of human spaceflight, they should be. However, when caution keeps you locked in a comfort zone, initiative and programs will atrophy and cripple the U.S.' space progress. [Moon Base Visions: How to Build a Lunar Colony (Photos)]

Several years ago, Bob Zubrin, my friend and sometime public debate opponent, had a key insight. When you bring everything you need with you from Earth in order to get to Mars, the mass you send to orbit can be prohibitive (consequences from the rocket equation multiply the gross departure weight by a large amount); it costs thousands of dollars per pound for delivery to low-Earth orbit (LEO). If you don't bring the fuel for the return trip home, your departure mass is much lower. For the trip home, Zubrin's Mars Direct architecture utilizes rocket propellant made on the Martian surface. In one fell swoop, he reduced by more than 50 percent the amount of mass needed in LEO to go to Mars — a significant finding.

The current NASA Mars Design Reference Mission utilizes eight launches of a super heavy-lift vehicle (150 tons, or 136 metric tons, to LEO) to construct the 500-ton (454 metric tons) Mars craft in Earth orbit. (Another analysis projects 10 to 12 launches.) More than 80 percent of this mass is propellant. If the heavy-lift vehicles end up costing a couple of billion dollars each, the cost of a human Mars mission is not only unaffordable, but so much so that it will never be undertaken.

And don't think the hallowed New Space "cheap access" to LEO will save you, either: Those vehicles are too small (their payload is much smaller than 150 tons) and will need to use storable propellant because the liquid oxygen-liquid hydrogen (LOX-H2) cryogens will boil away into space between their individual launches. Storable propellants have much less energy than LOX-H2 and, thus, besides the complexity of logistical assembly from a greater number of flights, the total required mass in LEO multiplies frighteningly.

Engineers can design an ISRU strategy for moon missions that not only retires risk for future ISRU use on Mars, but can also provision the Mars trip from lunar materials, further reducing the amount of mass launched from Earth. But why use the moon to document the value of ISRU, rather than a near-Earth asteroid? Simply put, the moon has the right materials and properties for performing this risk-reduction activity.

The results of the LCROSS impact experiment, in which a Centaur upper stage was crashed into a dark area near the moon's south pole, demonstrated that not only is water present in quantity on the moon, but there are other volatiles there as well, including methane, ammonia, carbon dioxide and some simple organic compounds. On the basis of their observed abundance, all of these substances are probably derived from comets that, over geological time, have hit the moon and are preserved in the permanently shadowed, cold areas near the poles. Asteroids typically do not contain those exotic, volatile substances; if water is present in asteroids, it is chemically bound in mineral structures and requires considerable energy and processing to be extracted and used.

Lunar ISRU can harvest not only water (and thus, oxygen) but also methane from the moon's polar deposits. Methane is the propellant Zubrin's Mars Direct architecture uses for Earth return. (However, because the Martian crust is water-rich, LOX-LH2 could also be used on Mars, making the lunar polar deposits doubly relevant.) From the Earth-moon L-1 point, either landing on or taking off from the poles of the moon requires about a 1.6 miles per second (2.6 kilometers per second) change in velocity, whereas transfer from the surface of Mars to Mars orbit for rendezvous and return to Earth requires a change in velocity of 2 mps (3.2 km/sec). Thus, the transfer energies for the two missions are comparable. This means that we can test the methane ISRU systems not only in principle — but the actual Mars equipment, in practice, three days away on the moon and in cislunar space (the area between the Earth and the moon). Moreover, if crews get into trouble during a mission, better for it to happen on the moon, where rescue might be possible.

In effect, these lunar properties mean that a complete, end-to-end systems test of all the pieces of a Mars Direct-style architecture could be performed in cislunar space, overcoming the most critical obstacle: the "risk" of requiring ISRU in the critical path.

In my opinion, ISRU is the most important and game-changing technology for future spaceflight. I will go so far as to say that a human Mars mission is inconceivable without incorporating ISRU in some form, most likely as a source of propellant but also for other potential uses (e.g., shielding, oxygen and water). And, such ISRU will not occur until it is proven in space, most easily and usefully on the moon.

A Mars mission conducted in the Apollo mode (everything launched from Earth) is not fiscally or politically possible. A national security imperative during Apollo allowed the United States to bludgeon technical problems to death with money. We no longer live in that world. Space programs must be affordable, which means that we cannot opt for the easiest or most familiar way to do something — we must be clever, frugal and use what is available.

During a recent hearing on the proposed new NASA Authorization bill, the two witnesses — Steve Squyres of Cornell University and Tom Young of Lockheed Martin Corporation— both opined that lunar return was not a prerequisite for human Mars missions. They are both wrong. The critical path to Mars goes through the Moon, although not in the way most engineers have been looking at it. They've viewed a lunar mission as a fancy dress rehearsal for the Mars mission, with people landing on the moon to conduct a complex and carefully choreographed EVA, to practice how they plan to explore Mars and then leave the moon as soon as possible. In their view, the main object of the lunar mission is to get it over with.

For a manned mission to Mars to be successful, a sustained lunar return is much more valuable than a touch-and-go, flyby or hover-over mission. Only on the moon can we learn for the first time how to extract and use off-planet resources. We permanently retire ISRU risk and open up space by using lunar resources. We practice the entire Mars surface mission sequence with Mars hardware flying in space — from landing, to refueling and ascent. To go to Mars without ISRU requires too much mass in LEO, and will necessitate multiple launches of expensive, disposable vehicles. As a result, a manned Mars mission would be unaffordable and, thus, unlikely to ever happen. Such expense cannot be justified under virtually any conceivable political circumstance, save for those associated with some national emergency — certainly an eventuality not to be hoped for.

And yes, for those following the breadcrumbs, by using the ISRU process, we'll develop a system that can routinely access all of cislunar space, including the lunar surface.

The views expressed are those of the author and do not necessarily reflect the views of the publisher. Follow us @Spacedotcom, Facebook and Google+. Orginal article on SPACE.com.