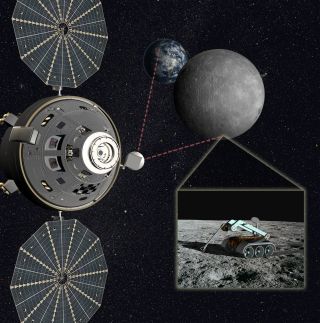 NASA is pressing forward on assessing the value of a "human-tended waypoint" near the far side of the moon — one that would embrace international partnerships as well as commercial and academic participation, SPACE.com has learned.

According to a Feb. 3 memo from William Gerstenmaier, NASA's associate administrator for human exploration and operations, a team is being formed to develop a cohesive plan for exploring a spot in space known as the Earth-moon libration point 2 (EML-2).

Libration points, also known as Lagrangian points, are places in space where the combined gravitational pull of two large masses roughly balance each other out, allowing spacecraft to essentially "park" there.

A pre-memo NASA appraisal of EML-2, which is near the lunar far side, has spotlighted this destination as the "leading option" for a near-term exploration capability. [Gallery: Visions of Deep-Space Station Missions]

EML-2 could serve as a gateway for capability-driven exploration of multiple destinations, such as near-lunar space, asteroids, the moon, the moons of Mars and, ultimately, Mars itself, according to NASA officials.

A capabilities-driven NASA architecture is one that should use the agency's  planned heavy-lift rocket, known as the Space Launch System, and the Orion Multi-Purpose Crew Vehicle "as the foundational elements."

According to strategic space planners, an EML-2 waypoint could enable significant telerobotic science on the far side of the moon and could serve as a platform for solar and Earth scientific observation, radio astronomy and other science in the quiet zone behind the moon.

Furthermore, the waypoint could enable assembly and servicing of satellites and large telescopes, among a host of other uses.

If NASA succeeds in establishing an astronaut-tended EML-2 waypoint, it would represent the farthest humans have traveled from Earth to date, the memo points out.

Extended stays at EML-2 would provide advancements in life sciences and radiation-shielding for long-duration missions outside of the Van Allen radiation belts that protect Earth, scientists say.

Moreover, Gerstenmaier added, EML-2 "is a complex region of cis-lunar space that has certain advantages as an initial staging point for exploration, but may also have some disadvantages that must be well understood."

A NASA study team is assigned the task of developing near-term missions to EML-2 "as we continue to refine our understanding and implications of using this waypoint as part of the broader exploration capability development," the memo explains.

A working group of International Space Station members — a meeting bringing together space agencies from around the world — is being held in Paris this week with NASA’s EML-2 strategy likely to be discussed with international partners.

Bullish on the promise of telerobotics exploration of the moon from EML-2 is Jack Burns, director of the Lunar University Network for Astrophysics Research (LUNAR) Center at the University of Colorado, Boulder. LUNAR is funded by the NASA Lunar Science Institute.

Burns and his team have been collaborating with Lockheed Martin (builder of the Orion Multi-Purpose Crew Vehicle) for more than a year to plan an early Orion mission that would go into a halo orbit of EML-2 above the lunar far side.

"This is extremely exciting from both the exploration and science sides," Burns told SPACE.com. "This mission concept seems to be really taking off now because it is unique and offers the prospects of doing something significant outside of low-Earth orbit within this decade."

In collaboration with Lockheed-Martin, the LUNAR Center is investigating human missions to EML-2 that could be a proving ground for future missions to deep space while also overseeing scientifically important investigations.

Roadways on the moon?

In a LUNAR Center white paper provided to SPACE.com, researchers note that an EML-2 mission would have astronauts traveling 15 percent farther from Earth than did the Apollo astronauts, and spending almost three times longer in deep space. [Lunar Legacy: Apollo Moon Mission Photos]

Such missions would validate the Orion spacecraft's life-support systems for shorter durations, could demonstrate the high-speed re-entry capability needed for return to Earth from deep space, and could help scientists gauge astronauts’ radiation dose from cosmic rays and solar flares. Doing so would help verify that Orion provides sufficient radiation protection, as it is designed to do, researchers said.

On such missions, the white paper explains, Orion astronauts could teleoperate gear on the lunar far side. For instance, the moon-based robotic hardware could obtain samples from the geologically appealing far side — perhaps from the South Pole-Aitken basin, which is one of the largest, deepest and oldest craters in the solar system.

Also on a proposed lunar robotic agenda is deployment of a low-frequency array of radio antennas to observe the first stars in the early universe.

Among a number of research jobs, the LUNAR team has been investigating how modest equipment could be used to fuse lunar regolith into a concrete-like material, which could then be used for construction of large structures, without the expense of having to carry most of the material to the lunar surface.

The ability to fabricate hardened structures from lunar regolith could also foster on-the-spot creation of solar arrays, habitats, and radiation shielding and maybe, even roadways on the surface of the moon.