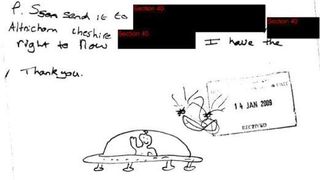 A schoolgirl in Manchester sent this drawing of a friendly "alien spacecraft" to the UK Ministry of Defence.
(Image: © The National Archives (UK))

Why did the British government shut down its official UFO Desk in 2009?

The truth can now be revealed, as the final cache of documents and UFO reports compiled by the U.K. Ministry of Defence (MoD) has been released to the public.

Apparently, the MoD concluded that operating the UFO Desk was a massive waste of time and money, according to SkyNews. [Ten Alien Encounters Debunked]

An official memo from 2009 to then-MoD Secretary Bob Ainsworth found "no defence benefit" in documenting the alleged UFO sightings: "The level of resources diverted to this task is … diverting staff from more valuable defence-related activities."

After manning the UFO Desk for more than 50 years, the officials found that "no UFO sighting reported to [the MoD] has ever revealed anything to suggest an extraterrestrial presence or military threat to the U.K.," the memo stated.

For sheer comic relief, however, the UFO files may have unprecedented value. In 2007, a man in West Glamorgan contacted the UFO Desk to complain that he "saw spaceships and then saw that one of them abducted his dog, car and tent when he and some friends were out camping," according to the files. MoD officials coolly advised him to contact the local police.

Then, in July 2008, a woman in Coventry saw "two orange balls" hovering over her backyard. She asked the MoD if she and her dog "could be contaminated" by the UFOs.

And in 2009, a schoolgirl from Manchester wrote a letter describing strange lights she saw in the sky, and included her drawing of an alien spacecraft. In response, the UFO Desk sent her a small bag of trinkets and "goodies."

Many of the reported UFO sightings were attributed to the growing popularity of Chinese lanterns (lightweight lanterns that rise through the air, buoyed by burning candlewicks). The lanterns have been blamed for a number of alleged UFO sightings worldwide.

The release of the UFO files is guaranteed to generate some controversy, as has occurred in the past. When British officials released an earlier cache of files in 2011, there was no information related to the "Rendlesham Forest Incident," a UFO sighting sometimes referred to as "Britain's Roswell." Some UFO enthusiasts reportedly thought the omission was a government cover-up.

And an Australian Freedom of Information request in 2011 revealed that virtually all of the government's UFO reports had been lost or destroyed.

A former MoD employee recalled his time on the UFO Desk with some whimsy. "Whatever you think about UFOs, the release of these files shines a light on one of the most intriguing subjects ever studied by the British government," Nick Pope told SkyNews.

"I hope people have as much fun reading these real-life X-Files as I had working on them," Pope said.