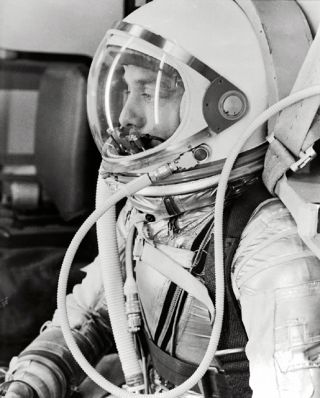 In this historical photo from the U.S. space agency, Astronaut Alan Shepard, in his silver pressure suit with the helmet visor closed, prepares for his upcoming Mercury-Redstone 3 (MR-3) launch. On May 5, 1961, Alan B. Shepard Jr. became the first American to fly into space.

His Freedom 7 Mercury capsule flew a suborbital trajectory lasting 15 minutes 22 seconds. His spacecraft splashed down in the Atlantic Ocean where he and Freedom 7 were recovered by helicopter and transported to the awaiting aircraft carrier U.S.S. Lake Champlain.