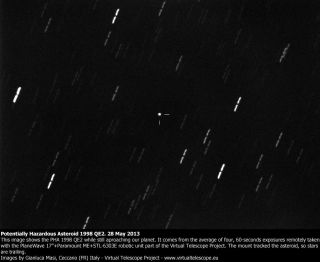 While waiting for its close approach on May 31, potentially hazardous asteroid 1998 QE2 was imaged by the Virtual Telescope remotely, using its 17" robotic unit. The mount was asked to track the asteroid, so it looks as a point of light, while stars are trailing. At the imaging time, 1998 QE2 was only 16 degrees above the horizon.
(Image: © Gianluca Masi/Virtual Telescope Project 2.0)

A massive asteroid nearly 2 miles wide will zip by Earth on Friday (May 31), in a cosmic event that has grabbed the attention of stargazers, scientists and even White House officials. The asteroid poses no threat of hitting Earth during the flyby, NASA officials assure.

The huge asteroid 1998 QE2 is the size of nine cruise ships, about 1.7 miles (2.7 kilometers) across, NASA scientists say. While the asteroid makes its closest approach to Earth on Friday, traveling within 3.6 million miles (5.8 million km), you don't have to wait that long to see it. NASA chief Charles Bolden will host live telescope views of the asteroid today (May 30) at 1:30 p.m. EDT (1739 GMT) during a one-hour broadcast from the agency's Jet Propulsion Laboratory in Pasadena, Calif.

You can watch the asteroid webcast live on SPACE.com courtesy of NASA. Later tonight, NASA will host a webchat about the asteroid with the agency's meteor expert William Cooke at the Marshall Space Flight Center in Huntsville, Ala. That discussion begins at 8 p.m. EDT (0000 GMT) and can be accessed here: http://www.nasa.gov/chat

Then on Friday (May 31), just hours before the asteroid flyby, the White House will host its own asteroid-themed "We the Geeks" Google+ Hangout starting at 2 p.m. EDT.

In its closest approach for at least the next two centuries, 1988 QE2 will whiz by at a harmless distance millions of miles from Earth.

The space rock was first discovered on Aug. 19, 1998, by MIT's Lincoln Near Earth Asteroid Research (LINEAR) Program near Socorro, N.M. The moniker 1988 QE2 was assigned by the Minor Planet Center in Cambridge, Mass., which names each newfound asteroid according to an established alphanumeric scheme that lays out when it was discovered.

Tempting as the connection may be, the space rock's name is not a nod to England's Queen Elizabeth II, or to the famous 12-deck ocean liner that was retired from service in 2008. But to give a sense of the asteroid's enormous scale, NASA officials pointed out that the QE2 asteroid is the size of nine QE2 cruise ships.

It's unlikely that an observer on the ground will be able to spot 1988 QE2 without the help of a telescope. Even from a location free of light pollution, the asteroid will be 100 times fainter than the dimmest star visible in the sky, according to the Slooh Space Telescope.

But there are several outlets where you can watch the flyby online.

NASA keeps a close watch on asteroids that could pose a potential threat to the planet, and President Barack Obama's 2014 federal budget request sought to ramp up those efforts by including funds to kick-start a new mission to capture a small asteroid and park it near the moon.

Earthlings were reminded of the danger of space rocks this past Feb. 15. On that day, skywatchers were waiting for an asteroid about half the size of a football field (2012 DA14) to pass by the planet at a distance of just 17,200 miles (27,000 kilometers). But hours before its closest approach, a different, 55-foot (17 m) object exploded without warning over Russia, damaging hundreds of buildings and injuring more than 1,000 people.