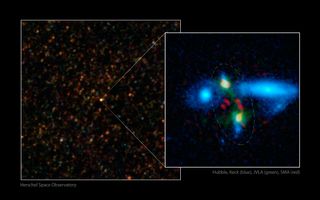 Two star-forming galaxies in the process of colliding 11 billion light-years away, as seen by a variety of telescopes. At right is a close-up view, with the merging galaxies circled. The red data show dust-enshrouded regions of star formation, while green and blue show carbon monoxide gas and starlight, respectively. The blue blobs outside of the circle are galaxies located much closer to us.
(Image: © ESA/NASA/JPL-Caltech/UC Irvine/STScI/Keck/NRAO/SAO )

Astronomers have caught two big ancient galaxies in the act of colliding, shedding new light on the role such megamergers played in galactic evolution during the universe's youth.

The colossal smashup will eventually produce one giant elliptical galaxy, researchers said, suggesting that most such behemoths formed rapidly in this manner long ago, rather than growing slowly over time by gobbling up a series of relatively small galaxies.

"I think at least 90 percent of elliptical galaxies at this mass were formed through this channel," study lead author Hai Fu, of the University of California, Irvine, told SPACE.com. [Watch video simulation of the ancient galaxy crash]

The merger is occurring 11 billion light-years away, meaning that astronomers are seeing the two colliding galaxies as they were about 3 billion years after the Big Bang that created the universe. During this epoch, "red and dead" elliptical galaxies full of old stars were common.

Fu and his colleagues initially thought the two merging galaxies were a singleton, dubbed HXMM01, when they saw it with the European Space Agency's infrared Herschel space telescope.

But follow-up observations with a variety of other instruments, both on the ground and in space, revealed that HXMM01 is actually two galaxies on a collision course, separated by about 62,000 light-years at the moment.

The gas-rich two-galaxy system contains the stellar equivalent of about 400 billion suns and is churning out new stars at a fantastic clip — about 2,000 per year, researchers said. For comparison, just two to three new stars are born every year in our own Milky Way.

At this rate, the newly forming elliptical galaxy will exhaust its gas reservoirs and cease birthing stars in just 200 million years, going red and dead in what researchers describe as a surprisingly short period of time.

"The common thought was that massive galaxies form by accreting smaller galaxies and the growth, though rapid, would last more than 200 million years," co-author Asantha Cooray, also of UC-Irvine, told SPACE.com via email.

"And the formation was expected to not be as efficient as we have observed," Cooray added. "The 40 percent efficiency of star formation, the efficiency at which gas is converted to stars in one rotation of the system, was unexpected."

Fu and his colleagues report their results online today (May 22) in the journal Nature.

The HXMM01 system's startling efficiency explains how elliptical galaxies can go red and dead so fast, Fu and Cooray said. Ellipticals' quick transformation had been a mystery, with some astronomers suggesting that their star-forming raw materials had been ejected by superpowerful phenomena such as quasars.

But this efficiency raises intriguing new questions, which Fu and his colleagues hope to tackle by further studying these ancient galaxies and their merging progenitors.

They want to "truly understand what is going on in those galaxies — why the star-formation efficiency is 10 times higher than normal star-forming galaxies," Fu said. "That part is a total mystery right now."