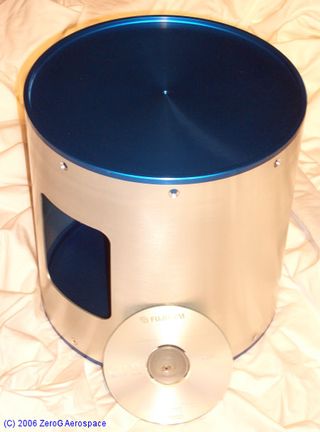 Image of the payload capsule where items will be stowed for launch.
(Image: © ZeroG/Tom Gonser)

If you've always wanted a personal souvenir from space but have no friends inNASA's astronaut corps or can't afford to spend millionsof dollars getting into space yourself, then a new service from startupcompany ZeroG may be for you.

ZeroGwill send small personal items into space starting at $49.  The company'sfirst launch will take place on May 20th from the new SouthwestRegional Spaceport in New Mexico.

"There arevery few people who have anything in their possession that has been to spaceand back. If you're interested in space, it's exciting," said companyco-founder Tom Gonser.

"Unless anastronaut has already carried it up there, you can legitimately say that anytype of small item put on this rocket is the first time the thing has been inspace," said ZeroG spokesperson Mark Benhard.

The companysells titanium rings and small boxes which can be used to carry trinkets intospace. Customers are also sending in their own items, Gonsersaid. Many have sent in business cards; a school is sending film as part of anexperiment to study cosmic rays; some have sent in pictures of loved ones,stamps, even ashes; Gonser's wife is sending up herwedding ring.

The itemswill be packed into an aluminumcapsule and launched into space aboard a sub-orbital rocket developed by UPAerospace. The rocket will blast off from New Mexico's SouthwestRegional Spaceport at 4,000 mph (6,400 kph) andreach space in less than 2 minutes. The rocket and its payload will beweightless for approximately 7 minutes before falling back to Earth, where thepayload will be retrieved.

Followingeach trip, items are returned to customers, along with detailed informationabout the flight and a certificate of authentication. People who send itemswill also have their names entered into the International Space Registry ashaving successfully delivered items into space.