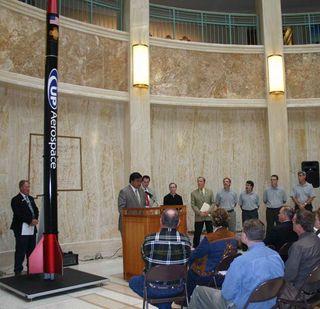 New Mexico Governor Bill Richardson sees a spaceport as revenue-generator for the state. In September 7 ceremony, he announced that the first rocket launch from the still-to-be-built spaceport is slated for March 2006.
(Image: © Eric Knight/UP Aerospace)

The selected spot for the future spaceport is near Upham, New Mexico, viewed by planners as an ideal location to handle future commercial launches, including piloted trips into space.

The site is in an area with a low population density, a lack of launch restrictions, and a large controlled airspace. At 4,600 feet (1,400 meter) elevation, the spaceport's low latitude, level land, and weather would allow vehicles to ascend to orbital inclinations, according to proponents.

These and other spaceport details were spelled out last week as New Mexico Governor Bill Richardson announced that the first rocket launch from the Southwest Regional Spaceport is slated for next March.

The New Mexico State Legislature has already committed $9 million to begin work on the spaceport. That outlay consists of $4 million for launch and landing facilities and $5 million for the planning and operations of the X Prize Cup - to be staged as an annual event to showcase personal spaceflight organizations and their hardware.

Additionally, this year the legislature created the Spaceport Authority, which will build and operate the Southwest Regional Spaceport, and allocated an additional $1 million in capital outlay funds.

"The rocket that goes up next March will not only lift a payload, it will launch what I believe will ultimately be the most significant commercial space facility in the country," Richardson explained. "This launch will be a brilliant signal flare that will let the nation and the world know New Mexico's spaceport is open for business. We can now say with certainty that the dream of this spaceport launching a new era in New Mexico's aerospace industry will become reality."

The Connecticut-based UP Aerospace, Inc. will launch its SpaceLoft rocket on a sub-orbital flight from the facility. The spaceport's christening flight will carry seven experimental and commercial payloads for a variety of scholastic and business entities. After traveling into space, the rocket and its payloads will land in the downrange area of the spaceport. Three launches are planned for 2006, twelve for 2007 and up to thirty in 2008, according to the group.

According to a press statement issued from Richardson's office, officials see the spaceport as bringing business to the state.

With future X Prize Cup activities at the Southwest Regional Spaceport New Mexico, there is the potential to "generate $500 million a year, with annual tax revenues reaching $20 million, which will create endless new opportunities for high-wage jobs for all New Mexican's and has huge potential to move New Mexico's economy forward," the press statement noted.

"New Mexico is launching a new era of opportunity that will bring with it high-wage jobs and economic growth, particularly for southern New Mexico," Richardson explained. "It is a cutting edge initiative that will help us continue to move our state forward."