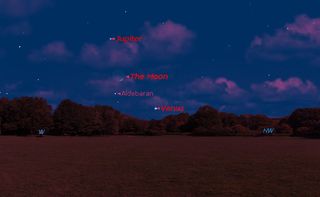 On Saturday, May 11, 2013, after sunset. Venus has now moved into the evening sky, and tonight it and Jupiter frame the slender crescent moon.
(Image: © Starry Night Software)

Enthusiastic skywatchers have perhaps been wondering what has happened lately to Venus, the most brilliant of all the planets.

Since the end of January, Venus has been on a sort of winter and early spring sabbatical. It passed superior conjunction (appearing to go behind the sun as seen from Earth) on March 28 and has been invisible ever since, mired deep in our star's brilliant glare.

Nevertheless, with each passing day, Venus has been moving on a slow course toward the east and pulling slowly away from the sun’s general vicinity. [Skywatching Events for May 2013]

Finally, during early May, it has begun to emerge as an evening "star" very low in the western twilight. On Saturday evening (May 11), it sets 27 degrees north of due west (10 degrees is roughly equal to the width of your fist held at arm’s length) nearly an hour after sunset.

By June 1, Venus will set 80 minutes after sunset, giving even casual observers their first view of the famed "Evening Star." Venus is so bright that it can be spotted even through twilight very low in the west-northwest sky 45 minutes after sunset, so look early, preferably with binoculars.

Appearing as a brilliant white star-like object, Earth's "sister planet" will adorn the western evening sky through the remainder of this year.

Unfortunately, for most Northern Hemisphere observers, this is going to turn out to be a rather crummy evening apparition of Venus, especially during the summer months.

The reason for this lies in Venus’ placement in the sky relative to the sun. From June 19 through Dec. 10, Venus will appear to have a more southerly declination than the sun. As a consequence, it will appear unusually low over the horizon right after sunset, especially through most of this summer.

On July 1, for example, observers living at or near 40 degrees north latitude will see Venus set just 1 1/2 hours after sunset.  At mid-twilight, the planet will appear to hover only about 6 degrees above the horizon.

By Aug. 31, this situation will have improved only slightly, as Venus will still be setting only 1 1/2 hours after sundown and at mid-twilight will stand about 8 degrees above the horizon. At no time through July and August will Venus be visible against a completely dark sky, as it will set before the end of evening twilight. [The 10 Weirdest Facts About Venus]

The situation is better in the Southern Hemisphere, where viewers will see Venus pull well away from the sun and gradually soar progressively higher in the evening sky during July and August. For example, by the end of August, Australians will see Venus setting more than three hours after the sun, and the planet will appear more than 20 degrees above the horizon by the end of evening twilight.

During September and October, however, the view will begin to slowly improve for northern observers for three reasons:

1) Venus will be getting brighter as it rounds the sun and speeds toward Earth.

2) Twilight fades faster in the fall than in summer, leaving Venus to shine in a darker sky. By mid-September, Venus finally sets just after the sky has become completely dark.

3) Venus will shift over from the west to the southwest. Objects at a given altitude above the horizon in the southern part of the sky take longer to set than do objects at the same altitude in the west, so the difference between the setting times of the sun and Venus will increase, albeit slowly. On Oct. 1, Venus will set 1 3/4 hours after the sun, but this improves to nearly 2 1/2 hours by Halloween.

Venus reaches its greatest angular distance from the sun on Nov. 1, when it will be 47 degrees east of our star. The planet will be brightest in early December as it heads back down toward the sun, reaching its pinnacle of brilliance for this apparition on Dec. 6 at a lantern-like magnitude of minus 4.9. (On the astronomical scale, lower magnitudes signify brighter objects.)

By this time, Venus will be an eye-catching sight in the southwest sky for at least a couple of hours after sunset right on through the Christmas season. Venus then quickly fades, vanishing from view in early January 2014, and passes inferior conjunction (coming between Earth and the sun) on Jan. 10. Within a week it will reemerge as the "Morning Star" low in the southeast sky.

Between now and early January, repeated observation of Venus with a small telescope will show the complete range of its phases and disk sizes.

Then, for the rest of the year the planet displays a large crescent as it swings near the Earth. Indeed, those using telescopes will note that while the Earth-Venus distance is lessening, the apparent size of Venus’ disk will grow, doubling from its present size by Oct. 9. When it has doubled again in size on Dec. 4, its large crescent shape should be easily discernible even in steadily held 7-power binoculars.

Venus will be one of three bright planets involved in what we at SPACE.com are billing as "The Grand Conjunction" later this month. Stay tuned for more details!

Editor's note: If you snap an amazing picture of Venus or any other celestial object that you'd like to share for a possible story or image gallery, send photos, comments and your name and location to Managing Editor Tariq Malik at spacephotos@space.com.

Joe Rao serves as an instructor and guest lecturer at New York's Hayden Planetarium. He writes about astronomy for Natural History magazine, the Farmer's Almanac and other publications, and he is also an on-camera meteorologist for News 12 Westchester, New York. Follow us @Spacedotcom, Facebookor Google+. Originally published on SPACE.com.