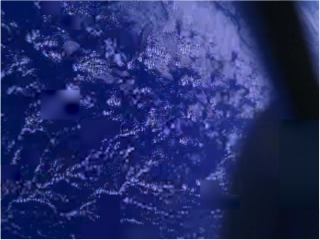 This image was pieced together by PhoneSat-2 (Graham) nanosatellite and the most recently reconstructed by the Ames Phonesat Team and multiple volunteer ham radio operators around the world.
(Image: © NASA Ames)

Three consumer smartphones that launched into space last month are beaming incredible photos Earth as it appears from orbit.

The images were stitched together as part of NASA's PhoneSat project, which aimed to show how existing technology could be incorporated into powerful low-cost satellites.

As part of the space technology test, the smarthphones' cameras captured photos of Earth and converted them into image-data "packets" to be beamed back on the amateur radio spectrum. These packets were then decoded and pieced together by the PhoneSat team and amateur ham radio operators. [Photos: NASA's Phonesats & Other Space Smartphones]

"The PhoneSat project also provided an opportunity for NASA to collaborate with its space enthusiasts," Bruce Yost, the program manager for NASA's Small Satellite Technology Program, said in a NASA statement. "Amateur radio operators from every continent but Antarctica contributed in capturing the data packets we needed to piece together the smartphones' image of Earth from space."

Each PhoneSat had a smartphone for a brain. Alexander and Graham — both PhoneSat 1.0s — were battery-powered and carried a Nexus One smartphone running Google's Android operating system. Bell was more advanced PhoneSat 2.0, built around a Nexus S smartphone running on Android. The nanosatellite was also outfitted with solar panels and a two-way radio that allowed engineers to control the satellite from the ground. What's perhaps most remarkable is that they were cheap. The three PhoneSats cost just $3,500 to $7,000 each; most satellites can cost upwards of $1 million.

Phonesat mission scientists are beaming over the short smartphone space mission, which ended April 27 when the three satellites made a fiery re-entry into Earth's atmosphere and burned up.

"During the short time the spacecraft were in orbit, we were able to demonstrate the smartphones' ability to act as satellites in the space environment," Yost said.

Alberto Guillen Salas, an engineer at the Ames Research Center in Moffett Field, Calif., who is working on the PhoneSat project, said the team had received more than 300 data packets just three days into the mission.

"About 200 of the data packets were contributed by the global community and the remaining packets were received from members of our team with the help of the Ames Amateur Radio Club station, NA6MF," Salas said.

The PhoneSats aren't the first smartphones to fly in space. A British-built satellite called STRaND-1, which was put into orbit earlier this year, was powered by a Google Nexus One phone.