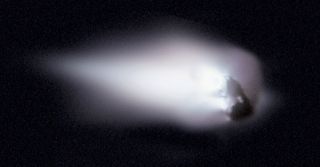 This view of comet Halley's nucleus was obtained by the Halley Multicolour Camera (HMC) on board the Giotto spacecraft, as it passed within 600 km of the comet nucleus on March 13, 1986.
(Image: © ESA. Courtesy of MPAe, Lindau)

A meteor shower created by bits of Halley's Comet is at its peak now, and NASA has a few handy tips for stargazers eager to see the display of "shooting stars."

The annual Eta Aquarid meteor shower is peaking today (May 5) as the Earth passes through a dusty debris field of cosmic leftovers from Halley's Comet. The shower should be at its best at 9 p.m. EDT (0100 GMT) tonight, offering stargazers with the best viewing conditions and locations a chance to see between 30 and 40 meteors an hour, according to an update from NASA's Marshall Space Flight Center in Huntsville, Ala.

Scientists at the Marshall Space Flight Center will provide a live webcast and chat during the Eta Aquarids from 11 p.m. EDT (0300 GMT) to 3 a.m. EDT (0700 GMT). You can watch the meteor shower webcast on SPACE.com, courtesy of NASA.

To participate in the NASA chat, visit: http://www.nasa.gov/connect/chat/aquarids_2013.html

Here are some tips from NASA on how to see the meteor shower:

Find a dark spot: City lights and street lights can ruin any stargazing attempt because they can outshine objects like meteors in the night sky. To make the most of your meteor gazing night, find a place well away from those interfering lights.

Look up: The Eta Aquarids get their name because they appear to originate from the constellation Aquarius, which currently rises over the eastern horizon at about 3 a.m. your local time. But staring directly at the constellation can be a mistake, since the meteors can also be visible as they streak across the rest of the night sky. "Lie flat on your back on a blanket, lawn chair or sleeping bag and look up, taking in as much of the sky as possible," NASA officials advised.

The Eta Aquarid meteor shower is known for spawning bright fireballs during their peak period. It is one of two celestial displays created by the dusty remains of Halley's Comet. The dust trail from the comet nears Earth at two points in the planet's orbit. When the Earth passes through the first region in early May, it creates the Eta Aquarids. The other Halley's Comet meteor display occurs in mid-October, creating the annual Orionid meteor shower.

Halley's Comet is a periodic comet that orbits the sun about once every 76 years. It is named after the 18th century English astronomer Edmond Halley, who accurately predict the return of the comet in 1758 after realizing that accounts of a dazzling comet throughout history were in fact the same object. Halley's Comet was last visible from Earth in 1986 and will return to our night skies in 2061.

Editor's note: If you snap an amazing picture of the Eta Aquarid meteor shower, or any other night sky view, that you'd like to share for a possible story or image gallery, send photos, comments and your name and location to managing editor Tariq Malik at spacephotos@space.com.

Email Tariq Malik at tmalik@space.com or follow him @tariqjmalik and Google+. Follow us @Spacedotcom, Facebookand Google+. Original article on SPACE.com.