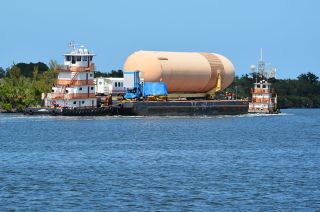 On its way to the Intercoastal Waterway, the barge carrying the external tank and other shuttle artifacts for the Wings of Dreams Aviation Museum is seen with Kennedy Space Center's Launch Pad 39A in the background, April 24, 2013.
(Image: © collectSPACE.com/Robert Z. Pearlman)

The 154-foot-long (47-meters) external tank, one of the shuttle program's original test articles that for years was displayed at Kennedy's visitor complex, departed the spaceport for the Wings of Dreams Aviation Museum at the Keystone Heights Airport in Starke, Fla., about an hour southeast of Jacksonville.

"It is the last one," Bob Oehl, the executive director and co-founder of the Wings of Dreams, told collectSPACE about the tank. "So it is quite a historic artifact in its own right." [Where to See America's Greatest Spaceships (Infographic)]

Known as the Structural Test Article (STA), the external tank was built in 1977 and used for loading and stress analysis tests. It was then exhibited at NASA's Marshall Space Flight Center in Alabama. In 1987, it was shipped to the Stennis Space Center in Mississippi for display where it remained for 10 years, prior to its transfer to Kennedy.

The tank was displayed in Florida until November of last year, when it was moved to make way for the retired space shuttle Atlantis and its new exhibition facility. A mock external tank is set to be erected outside Atlantis' building next month.

The displaced real tank, along with several other large shuttle artifacts including a nose cone and aft skirt of a solid rocket booster, as well as the crew transport vehicle that astronauts rode in after landing the shuttle at Kennedy, were making the first leg of their journey to the Wings of Dreams by water, before embarking on a still-to-be-scheduled 55-mile (88.5 kilometers) road trip to the museum.

"This will be the largest aviation article that has been transported over land since Howard Hughes moved the Spruce Goose," Oehl said.

Leaving the turn basin located opposite the 52-story Vehicle Assembly Building where external tanks were once mated with the shuttle orbiters they would help launch, the artifact-laden barge set sail by tugboat to the Intracoastal Waterway. It was then to head down the St. Johns River to end up in Green Cove Springs in about 30 hours time, where the shuttle parts will be offloaded for eventual delivery to the Wings of Dreams.

Before the artifacts can be trucked to the museum, however, miles of power and telephone lines, as well as street signs and traffic signals need to be cleared from the route's rural highways.

"It is a tremendous, tremendous effort and what is really unique about Wings of Dreams is that everything you see, the cranes, the tug boats, the barge, the huge trucks, the electricians, the welders, they are all donated," Oehl said. "This is not a government project."

"We have no major sponsor," he added. "We're looking for one because we have to house all of this."

The Wings of Dreams has already received from NASA more than 40 artifacts from the shuttle program, including the guidance and navigation "single system" trainer, or simulator, that the astronauts used to prepare for missions at Johnson Space Center in Houston. The museum is also receiving  the full-size mockup of the Hubble Space Telescope that shuttle crew members used to practice servicing the orbital observatory while floating underwater.

Established in 2005 to showcase aviation history from World War I through the shuttle program, the Wings of Dreams has plans for three sprawling hangars for a total exhibit space of 50,000 feet (15,240 meters). Until the museum can find the funding to erect the buildings, the artifacts are being stored in temporary warehouses and, if too large like the tank, outside.

Still, Oehl says, the public is welcome to come and see what they have — just be sure to call ahead first.

"Right now, it is by appointment," he said. "We're planning a partial opening of our field headquarters on May 4. Then it will be progressing through the year, building up from the there."

NASA is inviting members of the public who "Spot the Tank" and the other shuttle artifacts on their way to the Wings of Dreams Aviation Museum to share any photos they take with the Kennedy Space Center through social media.

Click through to collectSPACE.com for a photo gallery of the external tank and other space shuttle artifacts on their way to the Wings of Dreams Aviation Museum.