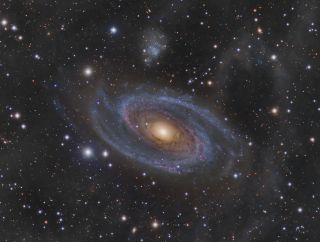 The Grand Spiral Galaxy appears to be spinning through the arc of Arp's Loop in this cool night sky image.

The Grand Spiral Galaxy, also called M81, is about 11.8 million light-years away. It is similar in size to our Milky Way and is one of the brightest galaxies in the sky. In this image, the bright, golden core stands out while the blue and purple arms spiral out from the center.

The faint arc on the top right of the image is called Arp's Loop. Scientists initially thought the loop was material pulled out of M81 by a larger neighbor, M2. However, later investigations showed the loop could also be part of the Milky Way Galaxy.