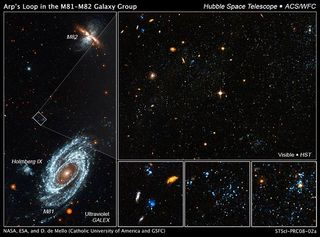 Left: Galaxies 12 million light-years away in the constellation Ursa Major. Right: The Hubble Space Telescope shows bright blue star clusters along a wispy bridge of gas stretched between the two galaxies, and a third companion galaxy not seen in this picture. The so-called "blue blobs" are clumped together in a structure called Arp's Loop.
(Image: © NASA, ESA, and D. de Mello (Catholic University of America/GSFC))

AUSTIN, Texas — Brilliant blue blobs weighingtens of thousands of solar masses have been found lurking in the seeminglybarren expanse of intergalactic space. The "eyes" of the HubbleSpace Telescope resolved the objects, which appear to be clusters of starsborn in the swirls and eddies of a galactic smashup some 200 million years ago.

Themysterious star clusters are considered orphaned, as they don't belong to anyparticular galaxy. Instead, they are clumped together into a structure calledArp's Loop along a wispy bridge of gas stretched like taffy between threecolliding galaxies — M81, M82 and NGC 3077. These galaxies are located about 12million light-years from us in the constellation Ursa Major.

"Wecould not believe it, the stars were in the middle of nowhere," saidDuilia de Mello of the Catholic University of America in Washington, D.C., and NASA's Goddard Space Flight Center.

De Melloreported the findings here today at a meeting of the American AstronomicalSociety.

Astronomershad not considered the gas tendrils thick enough to accumulate enough materialneeded to build so many stars. But the new images reveal they hold thestar-equivalent of five OrionNebulae.

While moremassive than most open clusters housed inside galaxies, the blue blobs are justa fraction of the mass of globular star clusters that orbit a galaxy. Theastronomers estimate that many of the clusters' stars are as young as 10million years and younger. Our sun, for comparison, is 4.6 billion years old.

De Melloand her colleagues suggest galactic collisions and the turbulent aftermathsmight have triggered the starbirth. In fact, it was about 200 million years agothat M81 and M82 had their last encounter.

Once the clusteredstars had burned out or exploded, the heavier elements would have been ejectedinto intergalactic space. The fact that the blue-blob clusters are notassociated with any galaxy means such elements produced during fusion in theirnuclear furnaces would be easily expelled.