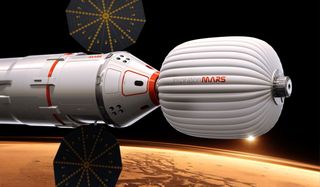 Progress made during the next year or so will determine whether a private manned Mars mission can get off the ground in 2018 as planned, its organizers say.

The pressure is on the nonprofit Inspiration Mars Foundation, which intends to launch two astronauts on a flyby mission around the Red Planet in January 2018. If the team misses this window, the next one won't open until 2031, when Earth and Mars are again suitably aligned for a fast roundtrip trek.

"We acknowledge the reach that this represents," Taber MacCallum, Inspiration Mars' chief technology officer, said of getting everything organized in less than five years. "The next year of effort on this is really going to tell, I think, whether or not we are able to close this as a mission."

Inspiration Mars, which was founded by original space tourist Dennis Tito, unveiled its ambitious plans in late February. The organization's proposed "Mission for America" would send two people — a man and a woman — on a 501-day roundtrip journey to Mars, punctuated by a close flyby of the Red Planet in August 2018. [Photos: Private Manned Mars Mission in 2018]

While the Inspiration Mars team wants to aid humanity's push out into the solar system, it also hopes to inspire the next generation of American scientists and engineers, much as NASA's Apollo moon program did in the 1960s and early 1970s.

"If we're not competitive as a nation in the sciences, we're going to continue to fall behind," MacCallum, who's also CEO of Arizona-based Paragon Space Development Corp., said Wednesday (April 3) during a presentation with NASA's Future In-Space Operations working group. "That's the only lever America has left internationally."

Making it happen won't be easy, as astronauts have never ventured beyond the vicinity of the moon, just 250,000 miles (400,000 kilometers) or so from Earth. If the Mission for America explorers succeed, they'll be about 38 million miles (61 million km) from home when they cruise past the Red Planet.

One of the biggest challenges for Inspiration Mars is developing an environmental control and life support system (ECLSS) that can be counted on for 500 days in deep space, far from any help, MacCallum said. [Manned Mars Flyby Mission Explained (Infographic)]

"There has never really been an ECLSS system built that was designed without an abort option for these kinds of durations, and with the level of recycling that would be required for this kind of a mission," he said.

The Mission for America's ECLSS will likely be far less automated than the one aboard the International Space Station, with tasks such as the cleaning and replacing of filters being performed by hand.

"That simplifies the overall design, the idea being conferring more reliability," MacCallum said, adding that Inspiration Mars hopes to have an ECLSS test facility up and running by early next year.

The relatively high radiation levels of deep space also pose potential problems, which could be mitigated by a combination of factors. Water could be used as shielding, for example, and older astronauts — people in their 50s, say — could be selected (because their lifetime risk of dying from the radiation dose accumulated during the flight would be lower than that of younger folks).

The psychological impact of a 500-day spaceflight is also a concern. Inspiration Mars officials hope to minimize possible problems by launching a married couple whose relationship has weathered many storms over the years.

They're also studying how people have behaved during lengthy stretches of isolation, such as on Antarctic research trips, the Mars500 mock mission to the Red Planet and the Biosphere 2 project in Arizona.

"These range of environments taken together actually provide a pretty good idea of what the behavioral health issues might be like," said MacCallum, who spent two years inside Biosphere 2 in the early 1990s.

The Mission for America astronauts will spend much of their time in a relatively roomy habitat module. But they'll need to return to Earth in a hardy capsule, which will hit our planet's atmosphere at about 31,700 mph (51,000 km per hour).

"No one's ever come back to our planet, that we know of, at that entry speed," said Mission for America team member John Carrico, of Applied Defense Solutions, Inc.

Inspiration Mars officials recognize how difficult it will be to meet all of these challenges in less than five years. But Tito's deep pockets should help give the team a fighting chance to pull off history's first-ever manned Mars mission.

Tito "has committed to two years of funding to get the mission off the ground, so we've got runway and altitude, and we are really beginning to engage the industry now," MacCallum said.