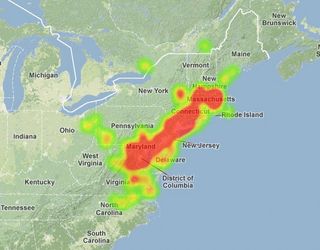 The dramatic fireball that lit up skies over the U.S. East Coast Friday evening (March 22) was caused by an asteroid just 3 feet (0.9 meters) or so wide, scientists say.

Such boulder-size asteroids slam into Earth's atmosphere every two or three days, so Friday's "Manhattan meteor" — which shone as brightly as the full moon and was apparently visible from Maine to North Carolina — isn't a terribly rare event. But the sensation it created on Twitter and other social media outlets is understandable nonetheless, said NASA meteor expert Bill Cooke.

"When you have something like this occur at 8 o'clock at night over one of the most populated regions of the United States, it's going to get people's attention," Cooke, head of the Meteoroid Environment Office at NASA's Marshall Space Flight Center in Huntsville, Ala., told reporters today (March 23).

The Manhattan meteor entered our planet's atmosphere over eastern Pennsylvania Friday and streaked southeast from there, flaming out over the Atlantic Ocean. While space rocks of this size sometimes produce meteorites (rocks that survive to reach Earth's surface), Cooke said, it's unlikely that scientists or collectors will snag any pieces of this one.

"The eyewitness accounts indicate that this meteor was last seen about 70 kilometers [43 miles] into the Atlantic, so I do not believe there are any meteorites on land from this event," Cooke said.

Some eyewitnesses have posted videos of the meteor to YouTube, which Cooke and his colleagues have been poring over. NASA runs a network of fireball cameras, but the instruments were apparently all clouded out or too far away to observe the event, Cooke said.

But people shouldn't start worrying that the sky is falling, Cooke stressed.

"If you look at the actual number of fireballs for this month so far, it's normal — it's the same as every other year before this one," he said. "It's just that people are paying more attention and looking up, I think, because of recent events."