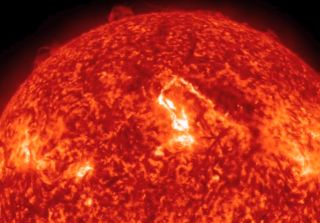 This screenshot from a video taken by NASA's Solar Dynamics Observatory spacecraft shows a coronal mass ejection (center) erupting from the sun on March 12, 2013.
(Image: © NASA/SDO)

The sun unleashed a huge cloud of superheated plasma Tuesday morning (March 12) in a solar eruption known as a coronal mass ejection (CME). This cloud is not headed straight for Earth, but it could deliver a glancing blow to our planet on Friday (March 15), researchers said.

"There is now a 65% chance of geomagnetic activity on March 15 due to this event," officials wrote Wednesday (March 13) on the Facebook page of NASA's sun-watching Solar Dynamics Observatory spacecraft. "High latitude watchers — [get] ready for possible Aurorae."

The eruption originated from a sunspot known as Active Region 1690, which at the time was centered on the Earth-facing side of the sun, they added. NASA also released a video of the solar eruption as seen by the Solar Dynamics Observatory.

Powerful CMEs that hit Earth directly can wreak havoc on our planet, triggering geomagnetic storms that can disrupt radio communications, GPS signals and power grids for days at a time. But Tuesday's eruption is not expected to affect Earth beyond possibly sparking some souped-up aurora displays.

The auroras, which are also known as the northern and southern lights, result when charged particles from the sun collide with molecules high in Earth's atmosphere, generating a glow. The phenomenon is usually restricted to high latitutes because Earth's magnetic field lines tend to funnel these particles over the planet's poles.

Tuesday's eruption notwithstanding, the sun has been pretty quiet recently. That's something of a surprise, because many scientists had predicted that the sun's current 11-year activity cycle — known as Solar Cycle 24 — would peak in 2013.

The lull has spurred some researchers to postulate that Solar Cycle 24 may actually have a double peak — one occurring in 2011, which saw many powerful sun storms, and another coming soon after the sun rouses from its mini-slumber.