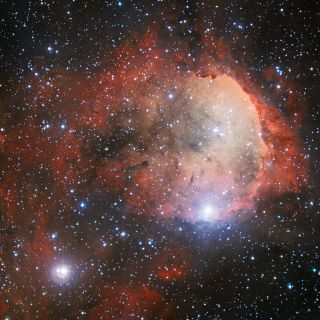 The Wide Field Imager on the MPG/ESO 2.2-meter telescope at the La Silla Observatory has imaged a region of star formation called NGC 3324. The intense radiation from several of NGC 3324's massive, blue-white stars has carved out a cavity in the surrounding gas and dust.
(Image: © ESO)

Massive galaxies began producing large numbers of stars far earlier than previously thought, which could change our understanding of how the universe formed, according to a new study.

Astronomers discovered these star-making factories as early as 1 billion years after the Big Bang, which sparked the beginning of the universe about 13.7 billion years ago.

Among the 26 galaxies observed, the median age was 12 billion years, making them among the oldest star-forming galaxies known.

"These types of galaxies, which are massive dusty galaxies that are forming stars — these are the most active locations of star formation in the universe," said Joaquin Vieira, a postdoctoral scholar at Caltech in Pasadena who led a study that will be published in Nature tomorrow (March 14). "The peak in the massive galaxies' formation was a billion years sooner than thought." [The Big Bang to Now in 10 Easy Steps]

Stars had a "baby boom" in the early years of the universe, while today we are seeing star formation decline. These early stars — churned out at a rate 10 times faster than today — were likely fueled by an abundance of cold gas, according to past research.

The "starburst" galaxies that Vieria and his collaborators studied were about 1,000 times more plentiful in the early days of the universe than now. Scientists had trouble, however, nailing down how old these galaxies are.

Difficulties arose in measuring the redshift, or the rate at which the galaxies are receding, because they are so filled with dust it's hard for conventional optical telescopes to see them. In astronomy, distant and old galaxies move the fastest. Younger galaxies have a lower redshift.

A new telescope has helped to bridge the gap: the Atacama Large Millimeter/submillimeter Array (ALMA) in Chile, which is designed to peer through the dust in galaxies and young stars. It observes in a wavelength slightly shorter than radio, but longer than visible light.

In anticipation of ALMA, the researchers used the Antarctic's South Pole Telescope to identify high-redshift galaxies. That telescope is designed to look at the Big Bang's afterglow, also known as the cosmic microwave background, but it is sensitive enough to ferret out interesting and old galaxies based on their color.

"We had been waiting five years for ALMA, so by the time it turned on we were ready with a full catalog of sources," Vieira said.

The astronomers used gravitational lensing, a phenomenon in which light "bends" around a galaxy or object in front of the target, to observe their targets.

When the researchers turned ALMA toward the galaxies, they discovered that two of the their redshifts were at 5.7 – the highest known measure for any galaxy of this type, placing them within the first billion years of the universe's life.

With the median of the galaxies observed coming in at a redshift of nearly 4, this put the evolution of the starburst galaxies at a billion years earlier than previously derived.

"When I was in grad school, people were excited about redshift 4. Now we're pushing redshift 6," Vieira said.

While it's commonplace to discover galaxies at redshift 8 and beyond in visual wavelengths, these optical galaxies are very faint, Vieira added.

The ones visible in millimeter wavelengths are "absolute monsters," he said, because they are gravitationally lensed and can be observed in great detail. That will be the next step of the research.

Vieira plans to plot more starburst galaxies with ALMA, aiming to bump the number up to 100 to get a more representative sample of the early universe.

What excites him most, however, is the possibility of imaging dark matter, the mysterious stuff thought to make up 80 percent of all matter in the universe. ALMA can infer the amount of dark matter — which is only detectable through its gravitational effects — through gravitational lensing.

In this case, astronomers would use the light from the distant galaxy as a backlight and investigate how the light is bent by the intervening dark matter. The light path can then be reconstructed, and the scientists could image the dark matter and measure its properties.

ALMA will be at even greater sensitivity when Vieira next uses it, given that astronomers are gradually finishing the construction of the array.

At the time Vieira and his collaborators made the observations in 2011 and early 2012, there were only 16 antennas available. When they next use ALMA, it will be closer to its full complement of 66 antennas (there are now 57 available, with the rest expected to be completed this summer), affording much greater resolution and sensitivity of these early galaxies.

The research is encompassed in three papers spanning two journals: a Nature paper that talks about the properties of the starburst galaxies, and two Astrophysical Journal papers studying the redshift distribution of these galaxies as well as the gravitational lensing.