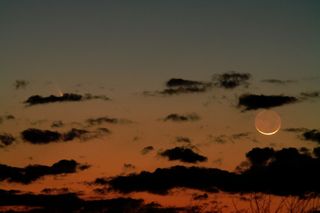 If you step outside shortly after twilight on Sunday night (March 17), you may catch a spectacular heavenly panorama involving the moon, a planet and a visiting comet.

High in the southwestern sky, weather permitting, observers can see the moon riding close by brilliant Jupiter, locked in a close conjunction. The Comet Pan-STARRS, meanwhile, rounds out the evening sky view low on the western horizon.

The moon will be a narrow crescent, two days short of first quarter, and you should be able to see its darkened portion faintly illuminated by earthshine, sunlight reflected from the sunlit Earth.

Jupiter is now receding towards the far side of the sun, but it is still the brightest object in the sky other than the moon.

The moon and Jupiter both stand in front of the vast Hyades star cluster, with the red giant star Aldebaran nearby. Just to their right is the brighter, more compact Pleiades star cluster.

Off to their left is the familiar constellation Orion, with its two contrasting, first-magnitude stars, red Betelgeuse and blue-white Rigel, along with its jaunty belt of three equal stars. Further to the left is the brightest star in the night sky, Sirius.

To the right of the moon and Jupiter and low on the horizon, is the downward-pointing "finger" of Comet Pan-STARRS, a special visitor to our skies this month. [How to see the comet]

Comet Pan-STARRS, officially known as C/2011 L4 (PANSTARRS), was discovered in June 2011 and is one of several comets gracing the night sky in 2013. The Comet Lemmon has been visible in recent weeks by stargazers in the Southern Hemisphere. In late November, the incoming Comet ISON may potentially put on a dazzling display when it makes its closest approach to the sun, NASA scientists and astronomers have said.

As Pan-STARRS, the moon and Jupiter move towards setting on the western horizon, the skies of spring are rising in the east: Leo, Virgo and Bootes, with their bright stars Regulus, Spica and Arcturus —and, in their midst, the ringed wonder planet, Saturn.

This is the sort of vista on which stargazers thrive, available freely to all who will turn their eyes to the darkened skies. It is sad that so many on Earth see only a dim ghost of this view because light pollution denies them their stellar heritage. This weekend, try to seek out darker, unpolluted skies so that you, too, can share in the beauty of the night sky.

Editor's note: If you snap an amazing photo of the moon and Jupiter's close conjunction in the night sky, or any other celestial object, and you'd like to share for a possible story or image gallery, please send images and comments, including location information, to managing editor Tariq Malik at spacephotos@space.com.

This article was provided to SPACE.com by Starry Night Education, the leader in space science curriculum solutions. Follow Starry Night on Twitter @StarryNightEdu and follow us @Spacedotcom, Facebook or Google+. Original article on SPACE.com.